The Mail vs Wikipedia: They're more alike than they'd ever admit

Analysis When you live in a glass house, is it wise to start a rock-throwing competition?

Wikipedians this week added greatly to the amusement of the internet after around 40 contributors loftily declared that the Daily Mail was not a reliable source for citations. Much public hilarity ensued – for the reason that The Mail and Wikipedia are really far more alike than either would care to admit.

(Let's leave aside the complication that "The Mail" is really three things: two newspapers which have a highly antagonistic relationship – the Daily Mail and the Mail on Sunday – and a sensationalist website, which is a different beast entirely.)

Both the Mail and Wikipedia have noble ambitions. One wishes to make the world's information free, and the other vows to defend proud provincial values from the metropolitan elites, to speak truth to power, and so on. But in reality, both depend heavily for their traffic on showbiz trivia. When we last looked a month ago, 20 of the top 25 Wikipedia pages were entertainment pages, with Star Wars and Zsa Zsa Gabor-related entries snaffling 10. Today the picture is largely the same. The notorious publicity hound Zsa Zsa Gabor has fallen out of the top 25 to be replaced by... Milo Yiannopoulos. The Mail's "sidebar of shame" specialises in celebrity "breasts and buttocks", drowning out the newspaper's highbrow contributors.

Both also rely on reusing other people's work. That is to say both Wikipedia and the Mail Online reduce the roles of researching and editing common to both traditions to a process, to be fulfilled by low-paid staff or, in Wikipedia's case, unpaid volunteers. You can think of both as giant copying machines (one of Wikipedia's principles is NOR: "No Original Research"). I speak from experience here, after an exhaustive investigation that took four years to assemble, check and complete was shamelessly plagiarised the very next day, in a 2,000-word ripoff. The journalist responsible emailed to say he was very sorry, and shortly afterwards, severed his links with the Mail. But to this day, the plagiarised version still doesn't contain a link to the original, and cites no other source.

Both are also vigorous political campaigners – although only the Mail admits to be. Wikipedia now pays lobbyists, has an endowment fund, and took a highly visible and partisan role against digital property rights (in the SOPA protests) and against privacy rights (after the ECJ's so-called "Right to be Forgotten" ruling).

Both are what Media Studies profs would call "cultural signifiers" – they stand for something bigger. Wikipedia is a synonym for "crowdsourced knowledge" while the Mail is a synonym for a whole stack of values. Equally, there's mileage from declaring that whatever one may be for, one is safely against the other. For example, declaring that you never use Wikipedia, or that you wouldn't wipe your arse with the Daily Mail is a vivid expression of virtue-signalling. (Simply saying "dayley-mayell" is enough to get you on a BBC Radio 4 comedy. Probably for life.)

With Jimmy Wales now on the board of the Guardian Media Group – the Mail's arch enemy – this has a political dimension. 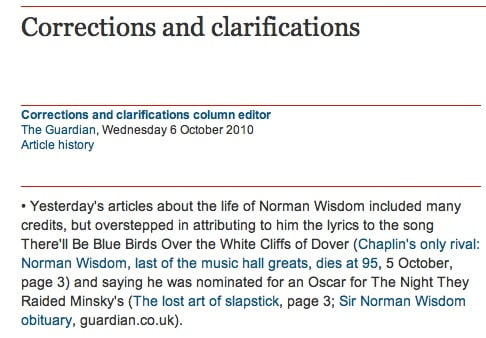 But both also claim to take the moral high ground with reliability – and here both come unstuck. As newspapers failed to devise new digital revenue models, they became more clickbait-driven, and took originality and reliability less seriously. But they also became increasingly dependent on Wikipedia, as this story from a decade ago demonstrated. After 20 years at the BBC, few obituary writers could resist including a fabrication inserted into Wikipedia by a prankster. The Guardian, Reuters, The Times and even the BBC itself copied and pasted the unlikely factoid into their obits.

The problem Wikipedia has created for itself this week is that the newspapers don't really care if they recycle Wikipedia factoids – the demand for "free fast facts" is something that Wikipedia largely exists to fulfil. But by making a grab for the moral high ground, Wikipedia must now disentangle itself from the Daily Mail, which is going to be difficult. And it also invites the world to examine just how reliable Wikipedia is, which is harder still.

Let's take the first one first.

There are between 5,000 and 50,000 links to the Daily Mail's websites from Wikipedia. Why the difference? Well, one search (try it) gives you some idea of the external links, but doesn't distinguish between active reader-facing Wikipedia articles, and old pages, talk pages or project discussion pages like RFCs. It's an overestimate. Whereas this search returns the number of articles, roughly 4,500, with at least one Mail citation. But an article may have multiple citations to the Mail sites: Wikipedia's entry for Adele currently has four, so the citation count will certainly be higher than 4,500.

Secondly, and this is the irony that has provided such enjoyment, Wikipedia is an inexhaustible supply of duff information, from ropey micro-factoids that nobody spots, to ambitious and witty hoaxes such as the Brazilian aardvark, or the Bicholim conflict, which can lie uncorrected for years. Wikipedia "won" the online information wars by being fast and cheap, not by being reliable. If one is to deplore the Mail's personal attacks on public figures, it helps not to have BLPs (biographies of living persons) that carry a huge red warning sign over them. ®