Roses are nice, but SSDs from Chipzilla (if these specs are true) are DRAM-NAND gap-filler

M.2 format 16GB and 32GB caching Optane drives have already been announced, but no add-in-card/SSD-type drives yet.

However, the Chinese TechBang website says it has seen a data sheet for an Intel Optane SSD, the DC P4800X, and says the product is ready for launch.

Ignoring all of Intel's previous XPoint hype and treating this as just another solid-state drive, we can see that its IO performance is not radically better than existing SSDs – in fact it's inferior to many – but its latency is lower than other SSDs, at less than 10 µs, and its endurance is far longer, at 30 drive writes per day.

We don't know its price so cannot judge its price/performance, but we can certainly say it reacts faster than NAND SSDs, has higher write performance and lasts much longer.

The data sheet specifies its capacity as 375GB and provides much performance and interface information. It says it is a half-height, half-length low profile add-in card, for example, and uses an Intel controller with Intel firmware: 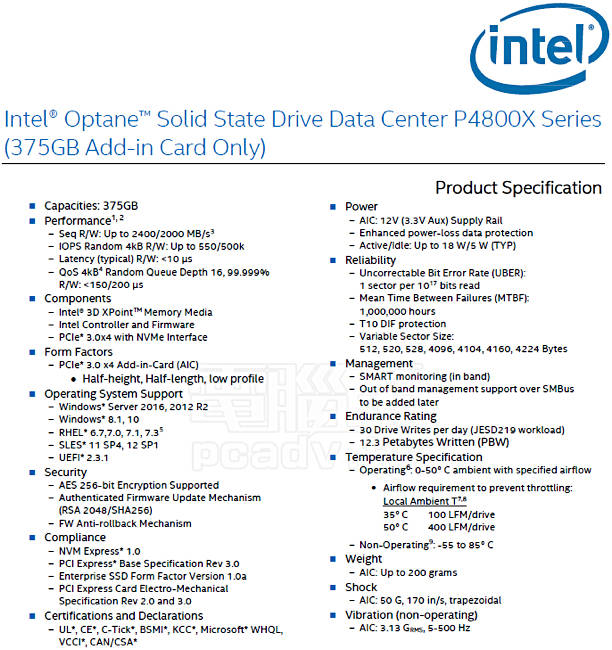 We have tabulated some data from this data sheet and compared it to existing Intel, Samsung and WD NAND SSDs also using NVMe interfaces. All the numbers are "up to" values.

A glance at the table shows that Samsung's PM1725a has a 1,050,000 random read IOPS rating, making the XPoint SSD's 550,000 look slow. However, Optane's 500,000 random write IOPS looks good, being double or triple other SSDs. Several drives in the table exceed the Optane product's sequential IO bandwidth; we can say it's respectable but not in the lead. Intel's own DC P3608 exceeds it comfortably.

The Optane drive's endurance is outstanding, up to 10 times better in drive writes per day compared to the other drives in our table. This is no device whose weak write performance/endurance means it has to be used for read-centric applications.

Is this leak genuine? Tom's Hardware found a conformity certificate on Intel's website, which is no longer available.

We have asked Intel about this DC P4800X and expect a firm "no comment". If we get anything else, we'll let you know. ®