Bereft of life, it rests in peace

The Yutu rover delivered in China's first moon-probe mission has popped its clogs and will become a permanent fixture of the lunar landscape.

"China's first lunar rover, Yutu, could not be restored to full function on Monday as expected, and netizens mourned it on Weibo, China's Twitter-like service," China News Service reports. "Yutu experienced mechanical problems on Jan 25 and has been unable to function since then."

The Yutu (or Jade Rabbit) six-wheeled rover rolled out onto the Moon on December 14 and took a brief look around the landing zone, pausing to send some pictures back to Earth. But the solar-powered rover had to be shut down for the first two weeks of January due to lack of sunlight.

As well as cameras, Yutu carries ground-penetrating radar capable of getting through 30m (98 feet) of the lunar surface, plus infrared and x-ray spectrometers on a robotic arm for measuring the chemical composition of the soil.

The rover restarted as planned, but Yutu failed to respond to commands when it came time to prepare for its next shutdown. The reported "mechanical control abnormality" now looks to have been terminal, although there's no word on the fate of the Chang'e-3 lander that delivered the Jade Rabbit to roam amongst the lunar regolith. 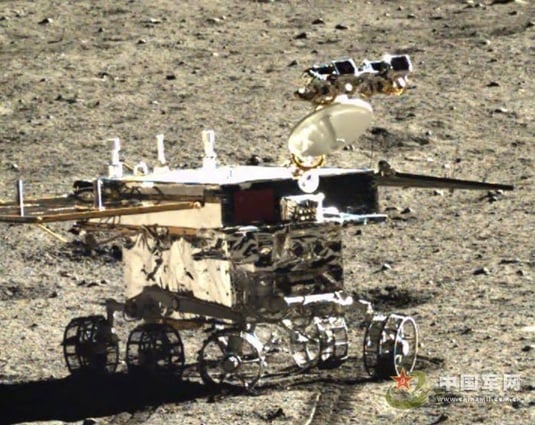 The early breakdown of the rover in what was supposed to be a three-month mission will cause some red faces down at the Beijing Aerospace Control Center, but China is learning what the former Soviet Union and the US discovered a long time ago – getting to the Moon isn’t hard, but hanging around is.

Landers on the Moon have to be engineered to survive extreme temperature differentials, from around 90°C to below -180°C between night and day. Although the rover gets some warmth from radioactive heaters, the hot and cold cycles cause components to get brittle and make electronics flaky.

There's also the problem of the fine lunar dust. The surface is covered with electrically charged particles that cling to objects and have proven highly abrasive. The dust gums up systems and causes friction damage to moving parts, as well as reducing the efficiency of solar panels.

The dust problem is the main reason that the Mars probe Curiosity dumped solar panels altogether in favor of a nuclear heart. That rover uses a basic nuclear power system to provide energy for getting around, but also to keep the rover warmish during nighttime periods. The reactor should outlast the rest of the rover's parts by years.

As lunar explorers go, it would be difficult to call Yutu a success in comparison to earlier attempts. The first robotic rover to hit the lunar surface, the Soviet's Lunokhod 1, spent nearly a year rolling across the landscape and sending back images to Earth, while its successor lasted four months before being disabled by a driving mishap.

The Americans didn’t bother with robotic lunar rovers, but instead left three battery-powered jeeps on the Moon that were carried by the last three Apollo missions. The Lunar Roving Vehicles carried astronauts over 43 miles of the lunar surface at a top speed of 8mph before being abandoned.

Yutu might not have lasted long, but the Chinese team can at least take comfort from the fact that the rover made it to the surface in one piece. That's good news if the country does decide to send a manned mission to our satellite at some point in the not-to-distant future. ®