In the kind of observational serendipity that astro-boffins live for: spotting the explosion of a supernova mere hours after the explosion's light started reaching Earth.

The catch, made in 2013 by the venerable Samuel Oschin 48-inch telescope as part of the Palomar Transient Factory Survey, is the “youngest” supernova observation ever made (if the adjective “youngest” can be used for an event that happened 160 million years ago, since SN 2013fs is 160 million light years distant).

After the automated Palomar survey spotted 2013fs in galaxy NGC 7610, other telescopes were drafted for follow-up observations, among them Palomar's 60-inch telescope, the Las Cumbres Observatory, instruments at the WM Keck Observatory in Hawaii, NASA's Swift satellite, and several international facilities.

Most of the time, supernovae aren't observed for days or weeks after their explosion, and that's inhibited how much astronomers know about the star-shattering processes involved.

Spotting SN 2013fs has given them some considerable surprises – in particular, the cloud of gases expelled by the star in its last year before exploding. This hasn't been seen before, because the shock-front of the blast sweeps away such debris.

The material 2013fs spewed out was heading outwards at around 360,000 km/h, and because it's a Type II, the most common type of supernova, it's a reasonable bet that other Type IIs do something similar.

Type II supernovae happen when stars between two and 50 times the mass of the sun run out of fuel, having first burned hydrogen and helium into heavier elements, and then burned those heavier elements until an iron core grows and collapses.

The amount of stuff the star was gassing in its dying year is also impressive: it shed around one-thousandth of a solar mass in that time.

The ejection also hints that our understanding of stars needs to be revised: “the structure of the outer envelope of massive stars during the very late stages of evolution may significantly differ from what is predicted by stellar evolution models”, the 33 team members write in the paper describing their discovery (at Nature here, or a pre-print at Arxiv). 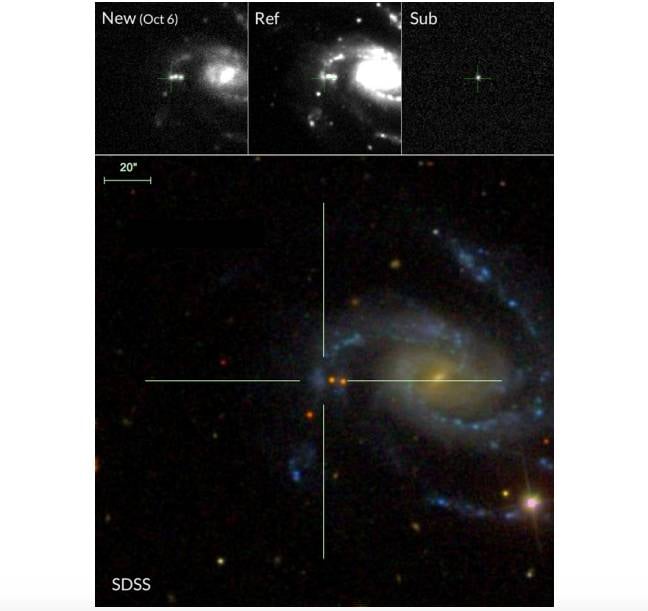 How lucky do the astronomers feel? Very: as they note in the paper, “it is likely that not even a single star that is within one year of explosion currently exists in our Galaxy”. ®