The Galaxy S3 is real but is its security FAKE NEWS? 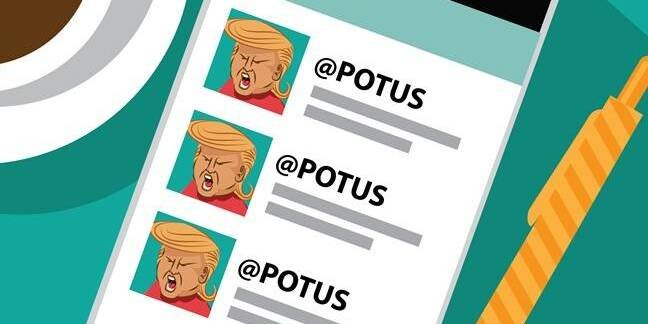 Fifteen members of US Congress have asked the House Oversight Committee to investigate whether President Trump is putting national security at risk by using an insecure phone and holding sensitive meetings in public.

In a letter to the committee, the congressfolk say [PDF] they were inspired by reports that the Commander in Chief is using a four-year-old Samsung Galaxy S3 to emit – and this is our technical term, here – borderline incoherent Twitter spouting. It's not clear if this particular Android gadget is his only handset, but some in Congress are concerned that it's putting the country at risk.

"Cybersecurity experts universally agree that an ordinary Android smartphone, which the President is reportedly using despite repeated warnings from the Secret Service, can be easily hacked," said Representative Ted Lieu (D-CA). "This behavior is more than bad operational security – it is an egregious affront to national security."

It was traditional for incoming presidents to be fully outfitted with Secret Service-provided communications gear, but Trump looks to be hanging onto his trusty handset. Obama refused to give up his beloved Blackberry when taking office. He also wasn't allowed by NSA staffers to use an iPhone.

The letter also refers to Team Trump's OPSEC comedy performance art at the President's Mar-a-Lago Club in Florida where he was having a public dinner with the Japanese Prime Minster when the North Koreans fired off a test missile.

Trump took phone calls on the matter within earshot of other people, looked on as his aides used their camera-fitted smartphones to illuminate government documents, and allowed the soldier carrying the nuclear football to pose with guests for Facebook snaps. The White House has since said that there was no classified information made public at the meal.

Finally, the signatories of the letter want an investigation into claims that Republican staffers aren't using the official secure White House email system (which is kept as a record), and instead are using an email server run by the Republican National Committee.

Having a private email server was a stick used to beat Hillary Clinton like a red-headed stepchild in the election, but it wouldn’t be the first time the Republicans have set up a shadow email server. In 2007 it came out that the RNC was running its own email system – it was shut down and 22 million emails were deleted before investigators could see them.

The request to the House Oversight Committee is unlikely to yield much of a result. The chances of the Republicans investigating one of their own in this manner are slight, especially considering the group is refusing to even consider investigating claims that Russian hackers might have influenced the last election. ®