Competition and wholesale costs, not lack of fibre, crimp broadband in Australia

Like the sun rising, the release of a new Akamai State of the Internet report inevitably leads to opinion columns bemoaning Australia's slide on global league tables for broadband speed, most attributing it to the much-hated “multi-technology model” NBN.

We're going to swim against the tide and suggest otherwise: the problem isn't the lack of fibre in the diet, it's a market structure that means, on average, an NBN user has 1 Mbps of network available to them at any given time.

“Australia's broadband is rubbish because we abandoned the fibre build” is a nice trope, but fibre is still the dominant technology on the NBN. In the 2016 annual report, nbn™ reported 823,000 active fibre users on the network, slightly more than 80 per cent of its user base at the time.

Here's what that looks like, charted against Australia's performance on the Akamai speed index. 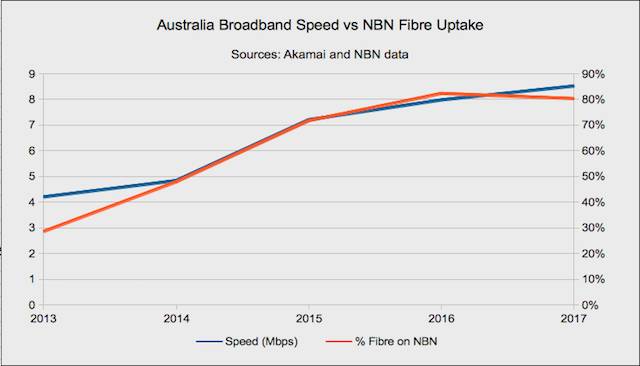 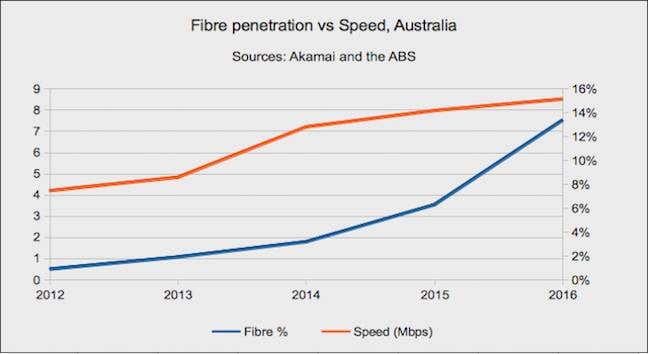 While Australia's raw performance, as measured by Akamai, more than doubled in that period, our position on the international “league table” slipped – in other words, other countries accelerated ahead of us.

Hence much angst: Akamai placed Australia at #50 in its 2016 Q3 State of the Internet report (with, by the way, a year-on-year 23 per cent improvement in average connection speed). 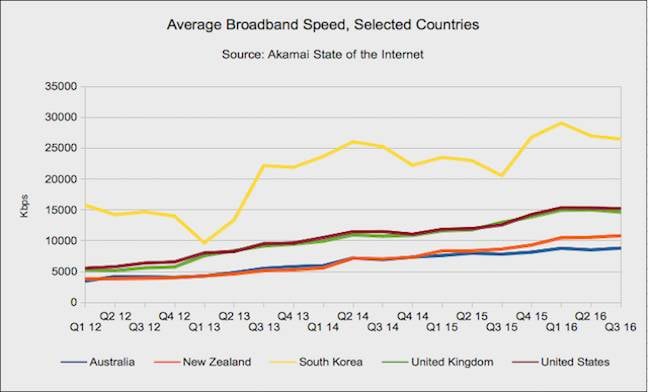 The growth of fibre connections is only yielding a slow improvement in connection speed, and screaming about the multi-technology model doesn't explain why, because there simply aren't enough fibre-to-the-node or hybrid fibre coax (HFC) connections to explain it.

There are, however, three clear market influences that represent policy failures of successive government:

CVC prices, which nbn™ charges for aggregated customer traffic, are clearly the biggest issue, and they're the subject of constant tussles between nbn™ and the rest of the industry.

That fee is charged on a “per megabit per second, per month” basis that has nothing to do with the package a customer buys.

The retail service provider (RSP) takes a bet on a user's download habits – that any given connection will, over time, average far less than the notional connection speed.

If someone signed for a 25 Mbps NBN connection is only actively downloading (for example) five per cent of the time, the retailer only needs to buy 1.25 Mbps of CVC capacity to service them.

(Vulture South didn't just pluck five per cent out of the air, by the way. A 20:1 relationship between customers and capacity is a long-standing rule of thumb in the ISP business, and today, industry newsletter Communications Day quotes TPG's Craig Levy saying the industry average CVC is 1 Mbps per user.)

The industry's complaints about CVC price are well-founded. That 1 Mbps per user costs an ISP AU$15.25 per month, which is a squeeze on profits. Which is why nbn™ last week tweaked CVC charges to offer more discounts by removing an averaging scheme that kept prices high.

And it doesn't help that just three retailers make up 92 per cent of NBN connections: Telstra (which claims half of all NBN connections), TPG (around 25 per cent), and Optus (about 17 per cent).

With so few companies competing for consumers, there's little incentive to buy even a little extra CVC capacity to improve performance.

In the past, independent ISPs like Internode could exert considerable influence by engineering their networks for better performance, but now only eight per cent of all Internet connections are provided by companies other than the “big three”.

Which brings us to the matter of Internet transit, the service every retailer needs to make connection to the core of the Internet in America.

The three companies that make up 92 per cent of NBN connections are also three out of the four transit providers in Australia (the fourth is Verizon).

The Australian Competition and Consumer Commission (ACCC) included transit in its Communications Market Study: Competition in evolving communications markets last year, so it may move on transit provision.

If we wanted a short-term pickup in Australia's international rankings, competition and CVCs represent policy failures at least as important as the controversial multi-technology model. ®