UK government-hosted talks spanning two Parliaments have culminated in Google and Bing at last agreeing to tweak their search results in response to copyright-holders' concerns, thereby heading off threatened legislation on their conduct.

The code means Google, Bing and other search engines will demote illegal sites from the top search results, meaning that fans searching for music are more likely to find a fair site.

Music groups have complained that despite a wealth of legal and free licenced music outlets, the search engines continue to promote unlicenced infringing sites, thus distorting the market. The Conservatives had already vowed to "to ensure that search engines do not link to the worst-offending sites" in page 42 of their 2015 Manifesto [PDF].

Recording industry trade group the BPI today hailed a new voluntary code of practice for search engines with both of the giants have signed up to, the first tangible result from six years of government-backed discussions, as a landmark. The BPI has sent over 450 million infringement notices to Google and Bing since 2011.

BPI chief exec Geoff Taylor called it a "world first", but warned it "would not be a silver-bullet fix". The agreement does not yet include one of musicians' biggest beefs, which is Google's autocomplete providing pirate-friendly terms.

"The code will accelerate the demotion of illegal sites following notices from rights holders, and establishes ongoing technical consultation, increased co-operation and information sharing to develop and improve on the process. It will also enable new practices to be adopted where needed," said a BPI statement.

Earlier this month, the government again threatened legislation if search engines do not come up with a working code.

Music groups cite research [PDF] that search engines provide prominent promotion of unlicensed music, discouraging the legal market. The BPI says 74 per cent of pirate downloads begin with a search engine "as either a discovery or navigational tool in their initial viewing sessions on domains with infringing content".

Even Google has acknowledged its role, citing referrals from Google to infringing sites in double figures. Here's an example. Five of the first seven results offer unlicensed downloads, while the other two are Amazon. 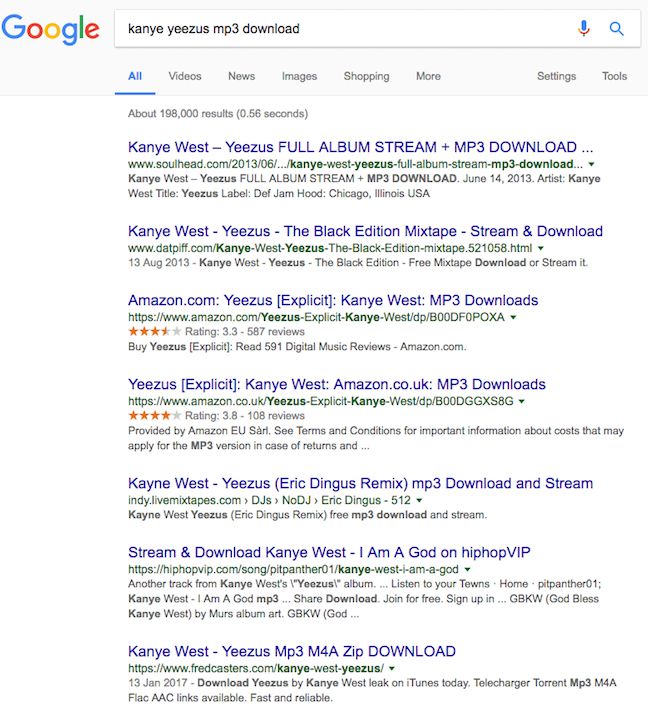 UK Music CEO Jo Dipple said the code of practice must be enforceable, and have an effect.

Baroness Buscombe told Parliament two weeks ago that she wanted a working code by 1 June, or the government would introduce a statutory code of conduct.

Buscombe told a Committee hearing on the Digital Economy Bill: "The search engines involved in this work have been very co-operative, making changes to their algorithms and processes, but also working bilaterally with creative industry representatives to explore the options for new interventions, and how existing processes might be streamlined.

"I understand that all parties are keen to finalise and sign up to the voluntary agreement, and so we believe there is no need to take a legislative power at this time. Surely it is better to act on a co-operative basis now, and start tackling this serious issue right away. If, however, a voluntary deal cannot be achieved, we will re-evaluate our options."