Kate Sutton talks to El Reg about search and maps

Interview “The thing that snookered us came eight years after the event,” Kate Sutton of Streetmap told The Register late last week, following the High Court’s ruling that Google’s manipulation of search results did not destroy her business despite that being exactly what happened.

Streetmap, the online mapping service, lost its High Court appeal against a 2016 ruling that Google had not abused its dominant position by promoting its own Google Maps service in search results above its mapping competitors, all but killing off Streetmap.

Lord Justice Lloyd Jones, sitting in early February this year, agreed with the original conclusion of Mr Justice Roth, saying that Google had not committed an “appreciable” abuse of its dominant position.

Google’s conduct was “objectively justified”, in Lord Justice Jones’ words, because it was carried out for consumers’ benefit. Google's argument in court, as accepted by both judges, was that it was "competing on its merits" against Streetmap – and, in addition, that Google's service in 2007 accepted natural language queries such as "Indian restaurants in Birmingham", something Streetmap did not do back then.

“This was a load of nonsense,” declares Sutton, referring to the objective justification argument. “All we were arguing is Google was in competition [with Streetmap] and they should have put numbers one and two up [in their search results] side by side.”

Lamenting the loss of the case, and the slashing of Streetmap’s monthly turnover from £280,000 in 2007, when Google implemented its OneBox map display for address searches, to barely £10,000 per month at the present day, Sutton has nevertheless kept her chin up despite the High Court nixing any hope of having the judgement overturned – and awarding costs against her into the bargain.

Nonetheless, the effects of the 10-year case on Sutton have been pronounced – when she met El Reg she mentioned that she was seeing doctors who were “checking me for a stroke.”

“I’m facing a £4.6m bill for Google’s legal costs, plus £2.7m of my own,” she said, adding that her family farm is being sold to help recapitalise Streetmap. Though she hints at having had wealthy backers at the outset of the trial – Sutton doesn’t name them – it is unclear just how much they are stumping up in the wake of the failed appeal.

In 2007 Streetmap was the technically better service when compared to Google Maps, Sutton said. Yet changes in Google’s search algorithms to promote its own services – such as giving preferential rankings to mapping sites that used Google’s bought-in .kml file format – hamstrung Streetmap, which was built on mapping data from the Ordnance Survey and the publishers of the famous A to Z road atlas series, among others. 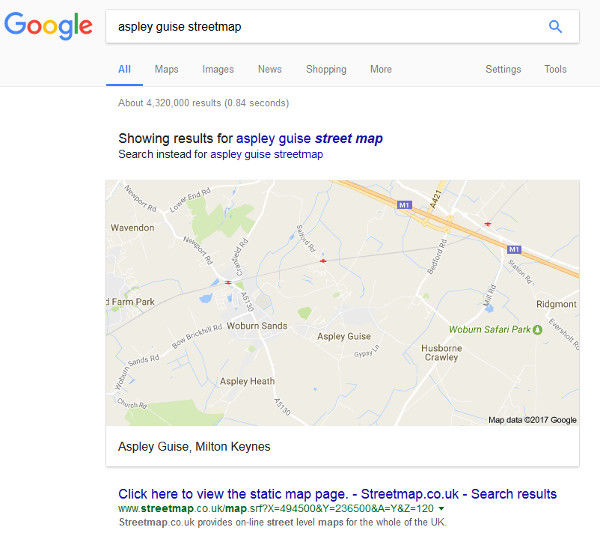 A screenshot taken earlier today of a Google search for a Streetmap result. Note the big clickable Google Map and the “spelling correction” suggested by Google, both prominently above the actual Streetmap result

During the trial, Google asserted that it was not dominant in search, a point which defies belief and had your correspondent questioning both his hearing and note-taking skills during the appeal hearing. Sutton said, afterwards: “We were stitched up like a kipper.”

Did the EU, with its well-publicised competition investigation into Google, provide any help? Sutton was dismissive. “They were so aloof, keeping their cards close to their chests.” Although Google’s spiders increased the amount of Streetmap’s site that they indexed once the 2011 EU investigation was opened – Sutton says this increased from one per cent to a whopping five per cent of the site.

“The only thing they could do [now] is impose a Remedy,” she said, referring to the EU’s powers to order companies to divest divisions or carry out internal restructuring if the EU Commission decides that a firm is engaging in anti-competitive behaviour. “Short hope with Brexit,” she adds.

As for any modern-day companies in the same situation that Streetmap was in a decade ago, Sutton advises: “Send [regulators] a letter now so a judge can’t say ‘well, did you contact them?’ later.”

Was it all worth it in the end? Sutton smiles. “I’m happy that I fought the battle because at least I can walk away with my dignity.” ®