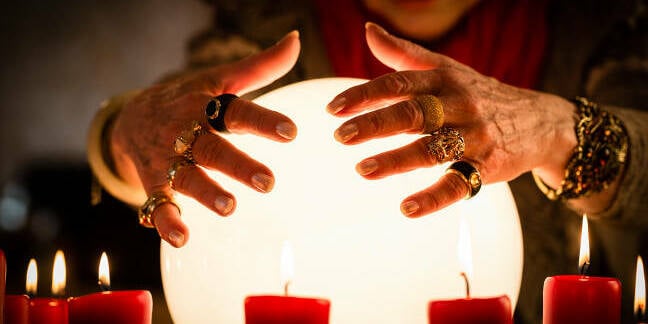 Analysis Current thinking among vendors with hyper-converged and converged infrastructure offerings is that physical SANs are in decline and their market is shrinking. Chad Sakac, Converged Platforms Division president at Dell EMC, is the latest high-profile prognosticator to push this view.

The Wikibon consultancy first talked about the server SAN idea in a January 2014 report, which mentioned Nutanix and SimpliVity. In April that year it went further, predicting that the growth of server-based SANs in enterprise and hyperscale data centres would prompt a dramatic fall in traditional enterprise storage use – meaning SAN, NAS and DAS – starting in 2017, continuing to 2022, then levelling off through to 2027. 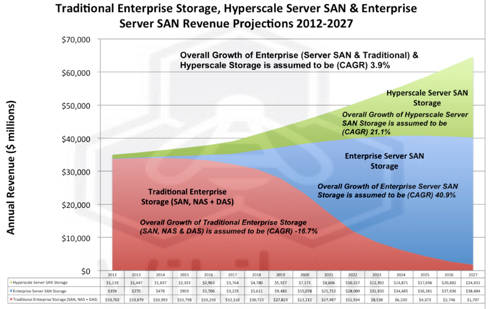 The Wikibon report, updated in July 2016, is available here.

Sakac's business unit covers hyperconverged infrastructure (HCI) VxRail and VxRack, the XC (OEM'd Nutanix), and the Converged infrastructure (CI) Vblocks. Inside Dell it will be Sakac's division delivering the hammer blows to Storage SVP and GM Jeff Boudreau's bunch of products if the physical SAN decline predictions are right.

Sakac makes these forecasts in a pair of blog posts, the first of which was published on February 9. Bluntly, he said:

1. Software Defined Storage is ready for the majority of x86 workloads (by volume) as hyperconverged infrastructure or pooled storage.

2. SANs are best suited for specific workloads that demand very high capacity or performance, or have complex data protection needs.

He says the external SAN market is slowing, that the converged infrastructure market is growing, but that growth rate is slowing while hyperconverged is taking off.

"The trend is also corroborated by the slowing growth of Converged Infrastructure (CI) – which is slowing. CI remains 'hot' at 2-30 per cent CAGR – a wide swing depending which CI player you're talking about. VxBlocks continue to grow at the high end of the range – but a 30 per cent growth rate still represents a 'slowdown' from 50 per cent and 100 per cent growth rates in years past."

In comparison he points to "the huge growth rates of vSAN (north of 7,000 customers), ScaleIO (100 per cent + CAGR) and HCI models like Dell EMC VxRail, VxRack and XC that have growth rates that are measured in multiples of 100 per cent CAGR."

Changes in the traditional external storage market are not happening overnight but the writing is on the wall. He says it is happening because server SANs (software-defined storage on hyperconverged plus converged infrastructure plus hyperscalers' infrastructure) have a granular scaling model. More simplicity especially at scale, and a better ability to leverage commodity hardware.

He says VxRail will get a full OPEX consumption model very soon, and coming developments include:

So Dell's HCI hardware and software will both become significantly more powerful.

The traditional world of shared external storage will feature all-flash arrays replacing disk arrays, and vendors growing revenues by taking business from each other while HCI takes general storage market share away from external arrays.

The subtext is that the external storage market will see vendor consolidation from the big three HCI vendors – Dell, Nutanix and HPE/SimpliVity, aided by Cisco with HyperFlex, the various HCI startups, and the coming NetApp SolidFire-based HCI offering.

Within the external storage market we see Dell, Fujitsu, HDS, HPE, Huawei, IBM, Kaminario, NetApp, Nexsan, Nimble, Pure Storage, Tegile, Tintri and others in primary storage, and Actifio, Cohesity, Primary Data, and others in converged secondary storage silos, plus Dell Data Domain, Exagrid, Quantum, Spectralogic and others with dedicated data protection storage arrays, and others like DDN and Scality, Cloudian and more in external storage niches such as HPC, object storage and Big Data analytics storage.

Compose yourselves: Western Digital chucks some bucks at Kaminario

Membership of WD's OpenFlex club has its perks

Call for industry giants to get zoned in on SMR, ZNS drives