Neuromorphic progress: And we for one welcome our new single artificial synapse overlords

A team of engineers has built an artificial synapse with the hopes of creating a neural network system with similar processing powers as the human brain.

"The brain is capable of massively parallel information processing while consuming only 1‑100 fJ per synaptic event. Inspired by the efficiency of the brain, CMOS-based neural architectures and memristors are being developed for pattern recognition and machine learning," the researchers wrote in a paper published in Nature Materials this week.

The artificial synapse functions kinda like a capacitor combined with a MOSFET. It's made out of two thin organic films with three terminals connected by a solution of briny water. The liquid acts as an electrolyte between the two layers of film. The top film has a gate terminal, and the bottom film has source and drain terminals. 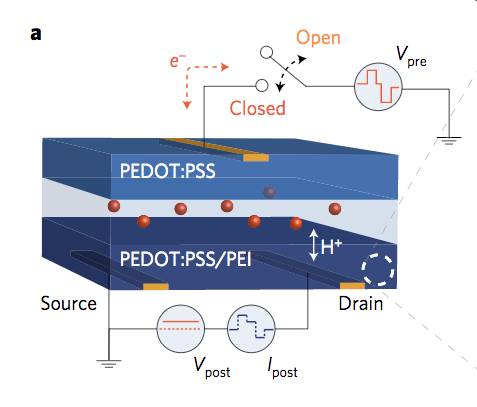 "It works like a real synapse but it's an organic electronic device that can be engineered," said Alberto Salleo, senior author of the paper in Nature Materials and associate professor of materials science and engineering at Stanford University.

"It's an entirely new family of devices because this type of architecture has not been shown before. For many key metrics, it also performs better than anything that's been done before with inorganics," he added.

Thus, you write the synapse's memory contents using the gate voltage, and then read the memory back by measuring the resistance, or current flow, between the source and drain. The liquid electrolyte is key to altering the lower layer's conductivity. Positive ions move between the top and bottom film layers, via the fluid, depending on the polarity of the gate voltage, and the ion concentration improves or diminishes the lower layer's conductivity.

This design combines both storage and a transistor gate in one, meaning decisions can be made immediately on the memory contents, and the information can be held in place without requiring constant recharging. And rather than store a binary value, the artificial synapse can actually store 500 states, we're told. Overall, this is much more power efficient than today's computer processor cores that have to move data to and from decision-making circuits and caches and memories, it is claimed.

The way in which the synapse cell stores information by subtly changing the write-mode voltage is similar to how real neural pathways are strengthened and weakened during the learning process in the brain. Researchers have pretty much worked out the voltages needed to tune the synapse to a specific electrical state.

Neuromorphic computing – creating a system of electronic circuits that mimics neurobiological architectures in the nervous system – could enhance AI.

"Deep learning algorithms are very powerful, but they rely on processors to calculate and simulate the electrical states and store them somewhere else, which is inefficient in terms of energy and time," said Yoeri van de Burgt, lead author of the paper and assistant professor at Eindhoven University of Technology.

Only one artificial synapse has been built, and it's not enough to do anything particularly useful. But simulations show that the computational power from an array of synapses can recognize handwritten digits from zero to nine. Testing on three datasets shows that the simulated group of synapses could identify the numbers with an accuracy of 93 to 97 per cent.

It's a difficult task that requires pattern recognition and a lot of computational power. It's a common test for computer vision systems, using the MNIST database to benchmark algorithms and models, and something traditional computers struggle with.

The flexible organic material of the synapse offers another "tantalizing opportunity," too, the paper said. It could be used for brain implants – magic kit to plug in and improve human minds.

That's purely science fiction. The power efficiency of fake synapses lags massively behind the real thing. The artificial switch right now uses about 10,000 times more energy than the minimum energy required for a biological synapse to fire and pass signals to neurons. Powering millions or billions of these man-made synapses attached to your head is impossible from your body, and impractical from external supplies.

The goal is to attain similar efficiency levels, hopefully by massively shrinking the design.

Interest in neuromorphic computing has grown. Last year, IBM also published a paper in Nature that showed how a phase-changing material could mimic an artificial spiking neuron. The tech giant is collaborating with UK universities to create a giant "electronic brain" as part of the European Union-funded Human Brain Project, estimated to cost over €1bn. ®