We're working on it

Updated The BBC has acknowledged that problems with the latest iPlayer software for PCs and Macs have left users unable to download shows to watch offline.

The problems have affected the current build for over a week.

The BBC notes that shows requested for offline viewing stall after about 12MB have been downloaded.

Others report that the requested download doesn't even start.

One reader did some sleuthing in the log file and noticed that the software reports errors loading the licence.

A BBC spokesperson told us: "An update to third-party software has meant that some people are experiencing problems downloading BBC iPlayer content to computers. We are aware of the problem and are working to fix it. Mobile and tablet downloads are not affected by the issue."

No timescale was given for the fix. 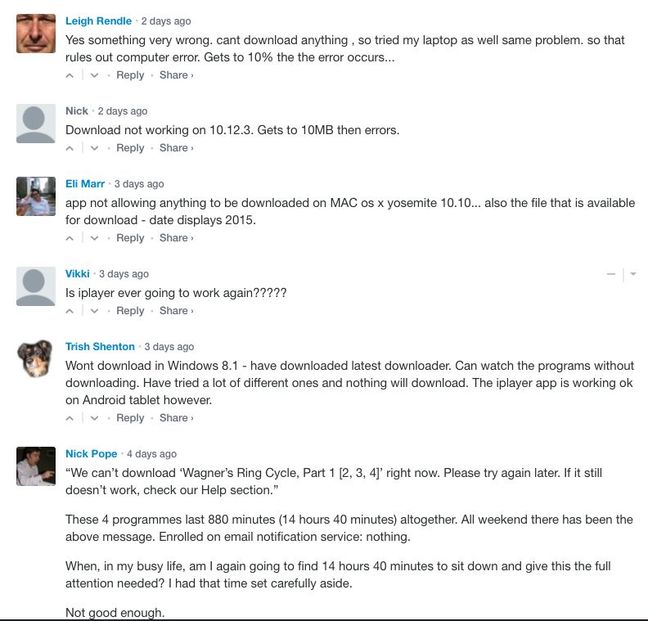 The BBC reintroduced offline viewing to iPlayer for mobiles in 2012. The service was originally designed – back in the primordial swamp era of 2003 – as a P2P system much like Limewire or Kazaa. That made a local copy of the media by default, but was bogged down in BBC bureaucracy. In a precursor of the DMI fiasco, at one stage around 400 people had input into the design of the system.

As networks had improved, a Flash-based streaming iPlayer was deemed "good enough" and the number of decision influencers cut from 400 to 15. The streaming iPlayer made its debut in 2007 and was a runaway smash – but offline viewing was a legacy feature belonging to the deprecated P2P behemoth.

Updated at 11am 23 February to add: The Reg has worked its magic. The BBC's just been in touch to let us know they've fixed the problem.