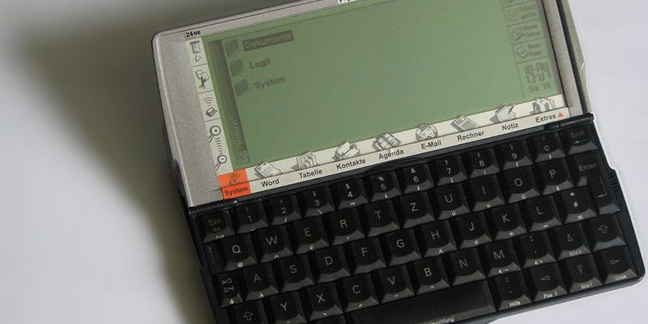 The Psion Series 5 has stormed a Reg poll of technologies readers would most like revived.

The ground-breaking personal digital assistant (PDA) pulled in a record 1,199 votes to land first place in The Reg poll: what technology is ripe for revival next?

The catalyst was HMD's decision to revive the much-loved Nokia 3310.

Second by a long way was the Sony Walkman Stereo Cassette player, with 672 votes, and in third place was Atari’s 2600 console – which succeeded in turning 1970s youf arcade game culture into a wholesome front-room experience.

The Series 5 benefited from 10 years of development on organisers from plucky British tech firm Psion, which started life building software with Sinclair Research.

With the Series 5, Psion managed the successful combination of hardware and software.

An ARM handheld computer ahead of its time, it weighed just 350 grams, packed a set of rich productivity apps - making it a hit with business types - keyboard and touch-screen input and a battery life of up to 20 hours courtesy not of some specialized or sealed unit but a pair or ordinary AAs. All that in clamshell you could snap shut and pop in your pocket.

Downsides? Too few to mention, but downsides nonetheless: a tiny, grey scale screen useless in direct sun and a screen cable with a reputation for breaking.

Reflecting on his 5mx, the slightly faster twin of the Series 5, which appeared in 1999, Reg reader David Robinson wrote:

“I still have and use my 5mx on a regular basis, mainly for the Palmtop Money app to track my finances. I've never found anything yet to replace the app's functionality to my satisfaction. Having a decent proper keyboard doesn't hurt either and runs forever on a pair of AAs.”

The form-factor was nigh-on perfect. I did almost an entire PGCE on a 5mx, so impressive was the keyboard. Colour screen with a few more pixels, modern ARM processor, decent chunk of memory, USB, WiFi, maybe a 4G modem, SD slot, fix the screen cable issues, yes update all of those, but

Not everything was perfect, and those AA batteries came with a downside.

According to G R Roslyn:

The hinge was very weak and broke extraordinarily easily. The worst part was the battery drain. particularly the quiescent drain. I had a number of users almost crying. They'd come back from a fortnights holiday to find both main and backup batteries dead, and all their data vanished. Personally, for pocket use the Psion peaked at the 3mx. All was not lost, however, the netBook was and is a dream. I have one, and it's in near daily use

If it were to return, how should the Series 5 be reborn?

You had some ideas: keep the keyboard, fix the screen cable and update with two decades of advances in tech: Wi-Fi, Bluetooth, SD or MicroSD, capacity colour touchscreen.

The only question: operating system. Linux or Android? ®