The new Ferrari of the storage world

Analysis Symbolic IO has rewritten the server hardware and operating system rule book with its its computationally defined storage (CDS) and says apps like database queries run 60 times or more faster on its system. If these claims are real then server suppliers like Cisco, Dell, HPE and others are in for a mighty market shock as one IRIS server could replace five or more standard servers.

This is just an off-the-cuff estimate after sitting through a Symbolic IO session at the TechLive event in London yesterday.

Symbolic IO (SIO) came out of stealth in May 2016 having been founded in February 2012 by CEO Brian Ignorimello, a former HP CTO. It had a $13.75m A-round of funding in 2015 and now has a working IRIS (Intensified RAM Intelligent Server) system it can show off.

The system employs computationally defined storage (CDS), and Ignorimello said that, with IRIS and its CDS, any app needs 20 times less RAM and four times fewer CPU cores than with a standard server, and runs many times faster.

A demo showed 80 video streams running simultaneously off a single IRIS system with just 21 per cent CPU usage. Ignorimello said: "Every POC with every customer has been successful and not one tester said they didn't want the system."

The main system components are:

IRIS is a server in a 2U rack enclosure in its IRIS-1 incarnation, with unique hardware features. 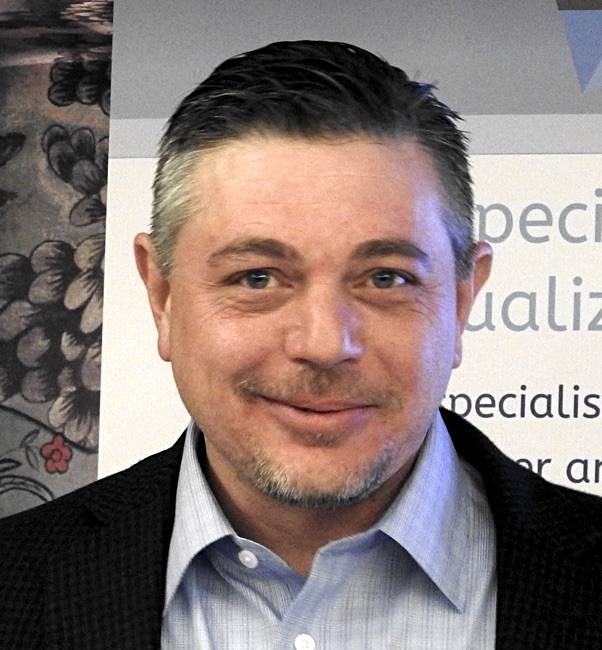 The computational design at the heart of Symbolic IO is a new way of coding binary data that, in some ways, is akin to deduplication. The idea is to examine an application's image and data files and replace long repeated bit value sequences with shorter formal bit markers.

Every time that sequence is found in a read-in file it is replaced with the symbolic bit marker. Entire image and data files are read in and encoded in this way and then written to persistent storage in a now shortened form. A series of patents covers this technology and we wrote about them here.

Such newly encoded files cannot be read and interpreted by anything other than an IRIS system. They are therefore effectively encrypted and inherently secure.

When the newly encoded, and now much smaller, image and its data files are read into IRIS memory, the SymCE operating system computes the original values from the bit markers and executes the application with no or minimal IO, thus accelerating it.

A slide said: "ECM (Elastic Computational Method) is not compression but a method that meshes vectors of binary instructors to generate data in the CPU, real-time, on the fly as applications and OSs need to access it."

Here is a SIO slide talking about the effect of CDS: 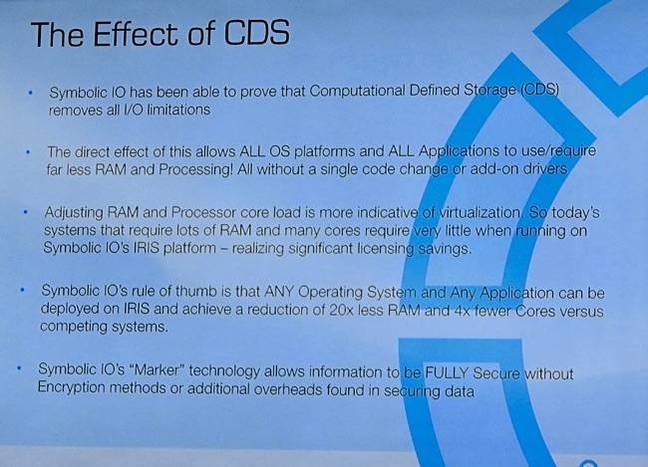 The reduction of RAM needs by 20 times and CPU core needs by four times must mean an IRIS server can do the the work of several traditional servers. SIO does not say what sort of server count reduction might be possible in an enterprise data centre shop. We're guessing a 5:1 or greater reduction, depending on applications and workloads.

An IRIS server is described by this slide: 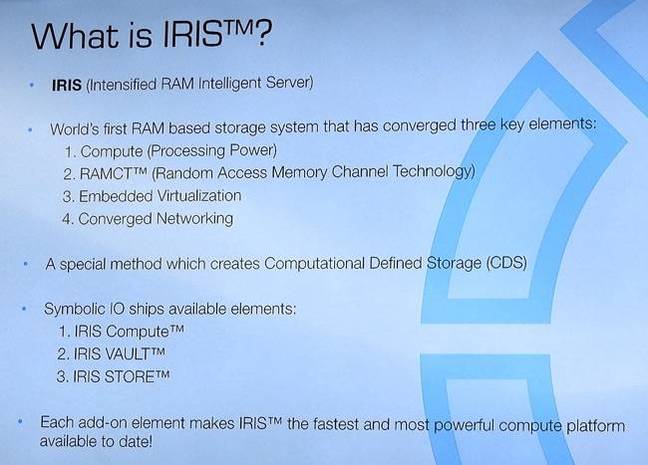 The server won't work unless a specific piece of proprietary hardware, an ASIC, called an EYE, is inserted in a slot in the rear fascia: 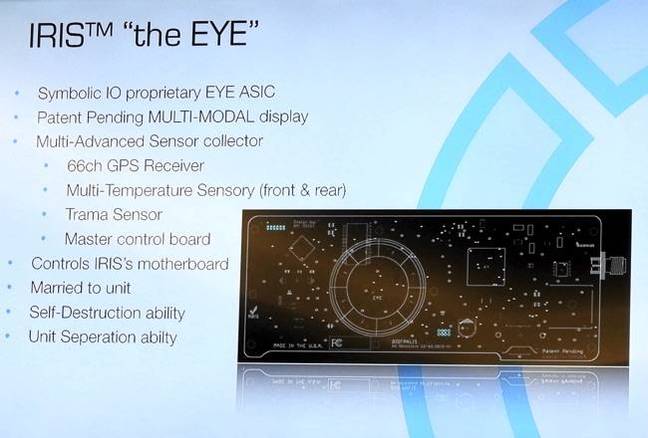 The EYE is like a large postcard in size and has a GPS receiver so that the IRIS location can be tracked; no one can cart one out of your data centre without you knowing where it is. Like a detachable car radio/stereo front plate the main unit will not work without it. It also has a self-destruct capability to render IRIS contents unreadable. There is thus no need for encryption key management.

The IRIS-1 server has an x86 CPU and a set of up to 21 StorModules, memory bus-connected DDR-4 DIMM cards providing storage-class memory, and holding RAM, a CPU and, we understand, a flash-like persistent solid-state store, although SIO indicated it was not flash. There is also a supercap connector so that when the system is powered down the RAM contents can be written to persistent memory. The supercap facility is rated at 16,000 joules. 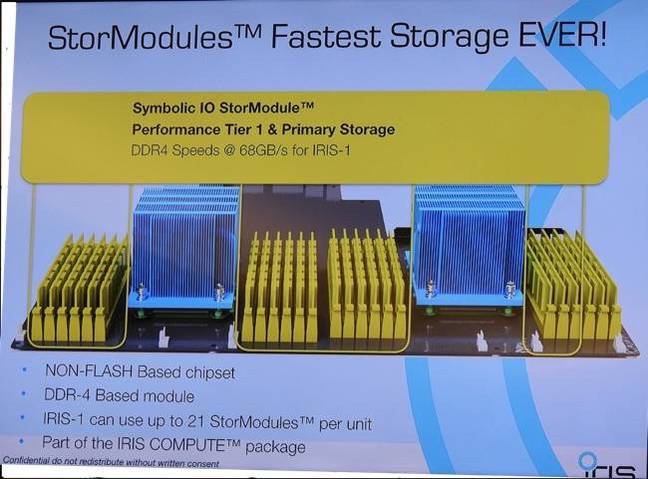 The StorModules provide an IRIS-1 server with its tier 1 storage. The demo system we were shown had 160GB of raw, effectively persistent memory capacity – we think that was 16 x 10GB raw capacity StorModules – and everything executed in memory, with no IO. It was fast.

The effective memory capacity was said to be 1.79TB, meaning a roughly 10:1 memory amplification, through using CDS.

Ignorimello said it had a 57GBps run speed, with SATA flash being 75 times slower, and 12Gbps SAS being 38 times slower.

We were told there will be IRIS-2 and IRIS-3 servers coming, progressively larger and faster systems, with IRIS-3, we think, being a 20TB system.

When the demo IRIS-1 system was powered up stored images and data were destaged and written to the StorModules. This took between three and five minutes. The StorModule contents are accessed as so-called LEMS, roughly equivalent to disks or LUNs, and the speed is 68GBps for IRIS-1. 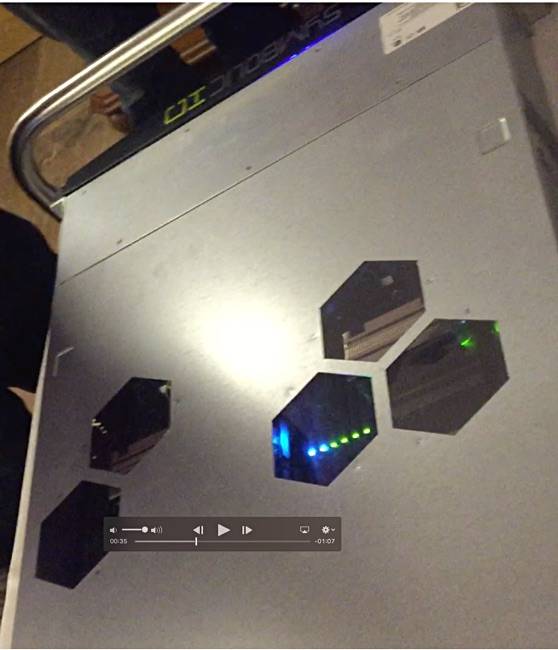 Video clip grab of IRIS stage and destage process with green and blue lights indicating progress. The lights are seen though transparent panels in the demo system lid.

The IRIS server can also have two more tiers of storage with automatic tiering enabled via the IRIS STORE product:

The 24 tier-3 slots can be configured with 20 SAS or SATA drives and 4 NVMe drives.

We were able to draw a partial main component layout diagram for the IRIS-1 system: 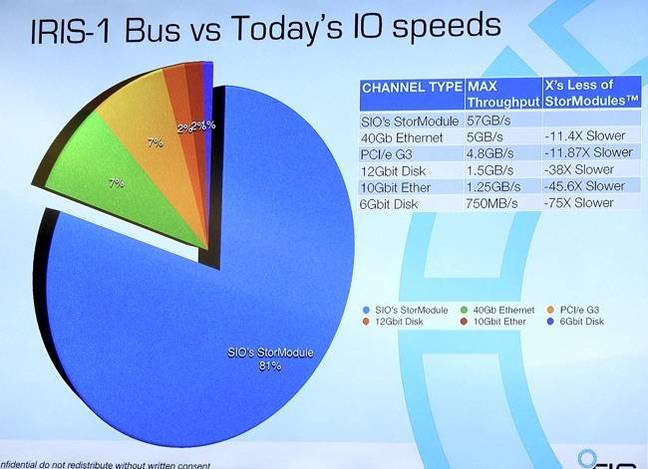 It can take state-independent snapshots for instant data backup and point-in-time copies. Such symbolic snapshots complete in seconds, are non-nested and there is no copy-on-write.

The OS also features state-independent cloning which, like snapshots, complete in seconds, are non-nested and don't require copy-on-write.

Data Replication is coming. It will be called Alt-Blast and Ignorimello said it would blow people's minds.

SymCE BLINK software provides complete IRIS infrastructure backup in minutes and it can be restored or scaled up in minutes as well. A BLINK contains machines, applications, security settings, configurations and data, and are application-consistent. They contain only symbolic bit markets and proprietary metadata so are secure.

Users could clone an IRIS infrastructure in minutes by using a BLINK. SIO says you can use it with an infused hypervisor to blink a virtual machine. You will be able to have N-way replication of BLINKs between a mesh of IRIS systems for high-availability and disaster recovery.

There is a system analytics capability using symbolic bit markers but not reading actual data. It uses, we were told, machine learning and has predictive analytics. A patent-pending data collection and search engine will include the ability to search the contents of a virtual machine.

We basically saw two demos. In one 80 videos were played simultaneously by 80 virtual machines, and the IRIS-1 and the CPU load was 21 per cent. In another some 40 virtual desktops were fired up, at a rate of 0.73 seconds per desktop another with 4.3 per cent of the CPU allocated when the 40 desktop instances were running.

They were all cloned off one image, we understand. We saw a screen doing 3D modelling and that was smooth with no jitter and no lag.

So, here we have a hot box with amazing performance that blows existing servers away. There are no independent benchmarks, no formal comparisons with other servers, such as "versus a ProLiant DL380 with XTB of DRAM and running the same defined workload and IRIS-1 system did" etc.

There are no analysis house evaluations from reputable firms like ESG or anybody else for that matter. OK, OK, it is the first demo box by a startup still funded from its A-round, and one function of the box is to prove to VCs that SIO is worth a B-round to build a basic go-to-market-and-operate structure. But, still, this so so good we have to ask if it is really smoke and mirrors?

Three people who were present and spoke at the TechLive event say to analysts and hacks that it is real. They are the CEO, Brian Ignorimello, whose LinkedIn profile shows stints as HP's CTO and NetApp's chief technologist before that, plus earlier time in EMC. 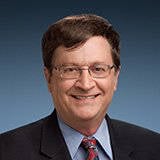 Then there is SVP and CTO Rob Peglar, who joined the firm from Micron and is a well-known and highly rated storage industry exec. At Micron he was closely involved in its solid state technologies such as 3D NAND and 3D Xpoint memory.

The third is SIO board advisor and investor Steve Sicola whose LinkedIn profile with time at Xiotech, Seagate, and as a CTO at Compaq and a senior consulting engineer at Digital Equipment before that speaks for itself. The storage desk at El Reg has encountered and met Rob Peglar and Steve Sicola numerous times over the years. The two were present alongside Brian Ignorimello and spoke at the SIO session. 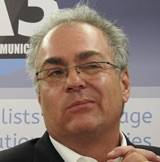 If they are for real then SIO is for real.

IRIS is a prove-we-can-do-it box with significant and unique IP in both the SW and HW areas. Based on what we saw and if comparative benchmark-style POCs do the business for SIO then we would say B-round funding is pretty much assured and customers will be able to buy IRIS-1 and give it a good going over.

If the results are good then trad servers are facing a big, big problem, as they face being simply outclassed. We might imagine the server players are already sniffing around SIO with a view to buy in technology and/or competitive takeouts. The latter would be undesirable as we'd like to see IRIS-1 give the server big shots a run for their money and, potentially, cause a significant lowering of server costs.

Then there's the effect on hyperconverged systems and storage arrays, but this article is long enough already so we'll leave it there. ®