Using modern hardware adapted for the TI‑99/4A architecture, some modders have been able to create massive cartridges that hold more than 170 virtual cartridge images, or terminal programs that up the modem speed from its original 4800 to more than 38Kbps.

"Sometimes the fun is in tweaking as much as possible from the limitations presented," Rateliff said. "For instance, with some clever bank switching we can currently squeeze 2MB ROM out of the 8k cartridge space, and 1MB of RAM in the 32k space."

The 'Don't Mess With Texas' demoscene

Others maintain a stricter standard, and many of the newer programs for the TI‑99/4A are designed to run on "stock" machines with the original hardware specs.

Getting set up with a TI‑99/4A generally costs about $50-100, depending on where you find the hardware and its condition. Like any hobby, however, the costs can add up should you get serious and decide to build an extensive collection.

"The most difficult thing I've encountered is not enough disposable income to buy more now and not enough time to learn everything I want to as quickly as I want to do it," said Rivera.

"With all the TI equipment and upgrades I have purchased it's probably around $5,000, if not more," said Schneider.

"I have also taken four road trips to collect TI items from individuals just giving away a truck load here or there (yes I said truck load) and once a 12‑foot flat bed." 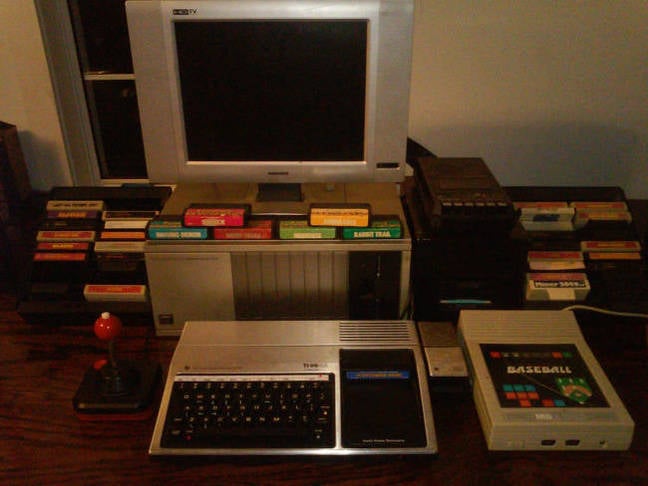 Games were, and still are, the main draw (Courtesy Opry99er/AtariAge Forums)

Regardless of their backstory, skill level, or cash investment, the TI‑99/4A fans all say they feel a sense of duty to preserve the history of a system that has largely been forgotten.

Even more than the preserving a favorite machine there is also a sentiment for a mostly bygone way of interacting with a computer.

"As we move further away in time from the genesis of the Home Computer Revolution, it becomes more unimaginable that these computers ever did anything more than beep, boop, and crash," said Rateliff.

"I know some people in their mid-20s and even early-30s who are enthralled by what these old machines can do and are genuinely interested in how things worked and still work, especially when you can compare it in terms of modern computers. Most amazing is how little things really have changed when you break it down." ®

Do you have an old-school interest, crazy hack, or otherwise wonderful project? Get in touch and tell El Reg all about it.