IBM UK: Oh, remote workers. We want to be colocated with you again

Exec professes love for 'colocation hubs'... just 'not sure everyone else will' 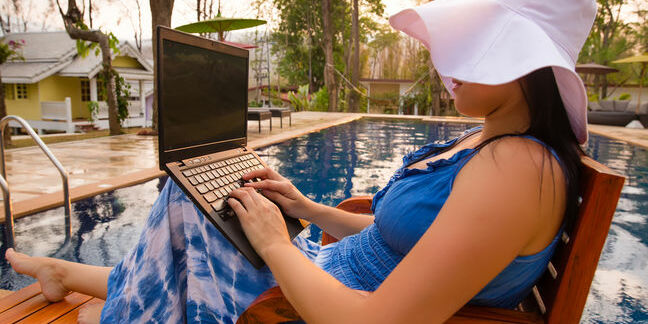 Exclusive IBM is clamping down on its remote workers in Britain, with the Global Technology Services team being centralised in one of a number of as yet unnamed “colocation hubs”.

Tosca Colangeli, IBM’s UK veep of GTS, warned employees in a recording, seen by The Register, that a “big feature” of 2017 is a “desire to be colocated together in a central location again”.

She said the team had “over time… become too disparate” and it was essential employees come into the office as IBM continues its “transformation” from old world tech warrior to a shiny new service provider.

It was also easier for co-workers to “clarify things” with each other when they sat “side by side” in a shared “working space”, Colangeli concluded, thereby avoiding those, er, nasty misunderstandings with remote working colleagues.

IBM's squeeze on teleworking techies in the US was exclusively revealed by El Reg three weeks ago when Big Blue demanded staff head into one of six “strategic” locations and work “shoulder to shoulder”. Employees were given 30 days to decide whether to agree to the terms - even if it meant uprooting their entire family - or quit.

The message in the UK is less stark - employment law here is stronger - and there is no deadline to move, at least not according to the information we have accessed.

Colangeli said locally “we’ll start to declare where our hubs of colocation are”. Current locations for GTS include London and an office in Warwick but she seemed to fumble when the subject moved onto plans for the Hursley office.

“I don’t know, we are not done on that yet. I need to think about that a bit more because I know what’s going to happen. If we declare a colocation hub then we are going to have to make sure there is space there for people to go there and colocate and that atmosphere works. So I am not pretending we are there yet,” she said.

Consolidation in the IBM South Bank branch saw some GTS folk centralised to one floor rather than being on four.

"It has totally changed the dynamics. Certainly I love it, I’m not sure everybody loves it cos now we are all together,” said Colangeli.

She said IBM was moderating the space with some “new meeting pods” and a “whiteboard” to do some “stand-up design thinking”, which had “totally changed the way we interact with each other.”

The next phase will see the “solutions, and our CSEs and our pricing and TSMs” from the Sampson House premises, also in the capital, to South Bank. That is phase two in our consolidation, so that has worked very well… there is more of that to come”.

To date, IBM has refused to publicly comment on the change in remote working policy - it has heavily promoted teleworking to customers. Insiders interpret the changes as a cost cutting drive rather than for productivity gains.

Of course, the savings in the US are far more dramatic than the UK where IBM manages offices and labs in 20 locations.

IBM resurrects Netezza data warehousing kit in the cloud, which will delight clients midway through migrating

Back from the dead: Appeals court resurrects lawsuit claiming IBM stiffs its own salespeople on commissions