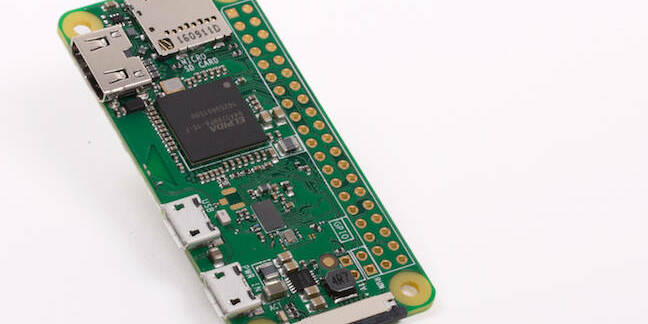 The Raspberry Pi turned five on Tuesday and the Foundation behind the computer has given us all a present: a new “Pi Zero W” model.

The Pi Zero emerged in November 2015 at the low, low price of US$5. That small sum bought you a 65mm x 30mm x 5mm package containing a Broadcom BCM2835 processor, 512MB RAM, an HDMI connector, SD card slot, two Micro USB ports and the same GPIO pinout as Raspberry Pi 2. But no networking.

The Pi Zero W fixes that, adding 802.11n Wi-Fi and Bluetooth 4.0 to make it easier to hook the computer up to the world. The Cypress CYW43438 wireless chip used in the Raspberry Pi 3 Model B has been deployed for the Zero W.

The new model also packs the following kit onto its slim, single-sided board:

How much would you expect to pay for all that? It turns out that adding the wireless bits doubles the price to a wallet-flattening (not) $10.

The Pi foundation suggests the addition of Bluetooth is aimed at making it easier to connect input devices so that the computer can be hidden away rather than tangled up with wires to keyboards and mice.

In the video below, the Pi guys say they've made 80,000 of the new model and are cranking them out at the rate of about 25,000 a week. You may therefore find your local distie has some, or none, given the usual burst of enthusiasm for any new rPi model.

The foundation also notes, in the post announcing the new model that all Pi models have now sold over 12 million units. Quite a feat, no? ®