18 months to change a chip? Better believe it 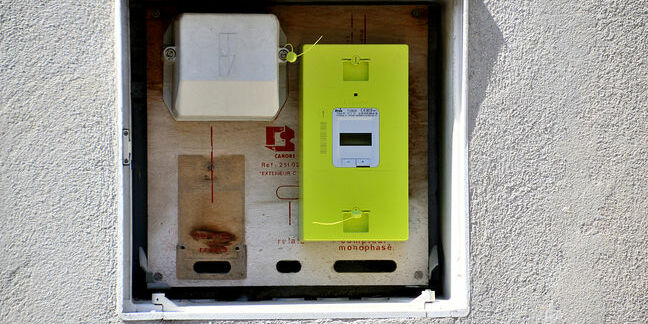 Exclusive EDMI, the UK maker of residential smart meter comms hubs, is seeking approval for a major modification to its kit - a process it had expected to take 18 months and cost £7m, leaked internal documents show.

The revelation has emerged as the meter industry continues to drip-feed marketing studies into the press to persuade consumers that smart meters result in lower costs for all concerned.

The alteration to EDMI's comms hub will allow the home device to operate in the 868MHz band as well as the 2.4GHz band originally specified. This is typically achieved by swapping one single-band module inside the unit for a dual-band module.

The redesign was triggered in 2014, according to a source familiar with the matter, after Data and Communications Company (DCC), the Capita subsidiary managing the UK-wide smart meter project on behalf of government, found a dedicated Zigbee wireless home area network (HAN) using 2.4GHz alone would not allow smart meters to work properly in every UK home.

EDMI Project PR023 documents seen by The Register, which we understand were under consideration by DCC from May 2016 onwards, show how EDMI identified that its proposed communications hub design could have its HAN capabilities extended to include using the 868MHz band. Of the £6.98m quoted by EDMI, about half was made up of staffing costs. The company wanted to charge UK consumers for 13 people working full-time for 18 months on the redesign project.

A provision is included in the project request documents to prevent companies involved in the smart meter project from charging double for staffing costs, meaning they cannot bill twice for time spent working on two simultaneous projects.

"We have not billed for a larger group of people than was necessary, nor for a length of time which was not based on actual time spent. PR23 is a project that had many iterations during the planning stage."

Delving into the detail

Some informed technical sources who were asked about the costings claimed EDMI figures for the project seemed expensive. They include an average of 325 working days (18 man-months) on development of hardware, firmware, software and security, among others, on what should be “a six month project at most”, one claimed.

Others disagreed and said the comms hub modification would amount to creating a new product that required recertification from scratch, thereby justifying the 18 month timescale.

The 13 people EDMI wants to put to work on the project would cost energy bill-payers £3.3m, or slightly more than a quarter of a million pounds each. The roles detailed in the document included a “manufacturing expert”, a “technology director”, a “risk manager” and a project manager, among others one would reasonably expect to see such as developers.

The communications hub gathers data from different manufacturers’ smart meters and outputs the data they gather to a separate display. EDMI is a monopoly supplier of communications hubs for Northern England and Scotland.

DCC was appointed by the government to implement the nationwide smart meter system. Costs for integrating smart meters into the UK’s energy distribution networks are being met from energy consumers’ pockets through increased bills.

As reported by The Register in September, the net energy bill cost saving per household was £26 a year, with the entire smart meter programme costing taxpayers £11bn. The government hopes to get 53 million meters installed by 2020, though just under four million had been installed as of late last year.

A decade old Cabinet Office review of the smart meter programme, also seen by The Register, was unable to pinpoint the financial benefits of the smart meter programme, noting only the cost-benefit impact assessments made at the time varied between a net cost of £4.5bn and a £7.1bn net benefit to the economy. The same report claimed that smart meters “by 2020 will deliver a net annual saving of £23” per dual fuel household.

The per-household cost given to the Cabinet Office at the time was an extra £390 for smart meters, against €150 per household in France when that country rolled out its own Linky smart meters.

Dan Lewis of the Institute of Directors told The Register: “The government’s poorly thought-out smart meters programme has stifled innovation, competition and consumer choice driving the final cost to the customer up.

"It started costing £7bn and we are now looking at over £11bn. This programme needs to be opened up to much cheaper alternative emerging smart energy solutions. Only when utilities have to sell the technology to consumers and are prepared to return most rather than some of the benefits, can the cost of the programme be brought under control.” ®