Anyone for Virtual Monkey Tennis? Telco tries to sell us on 5G

Forget gigabit phones – what do we do with all that lovely bandwidth?

MWC Two "gigabit" phones are being shown off at Mobile World Congress in Barcelona this week.

The name comes from their ability to download data at speeds of 1Gbps – or near enough – which is a halfway house from today's LTE to whenever's 5G. ZTE's demo unit was a testbed that showed real download speeds, while Sony's flagship Xperia ZX Premium will be capable of "gigabit LTE" when it eventually ships this year. Both use a Qualcomm Snapdragon 835 modem, and need a lot of work on carrier aggregation.

ZTE's is home brewed, an independently developed "Pre5G Giga+ MBB solution", which is actually a fully virtualised baseband unit with Intel chips inside. 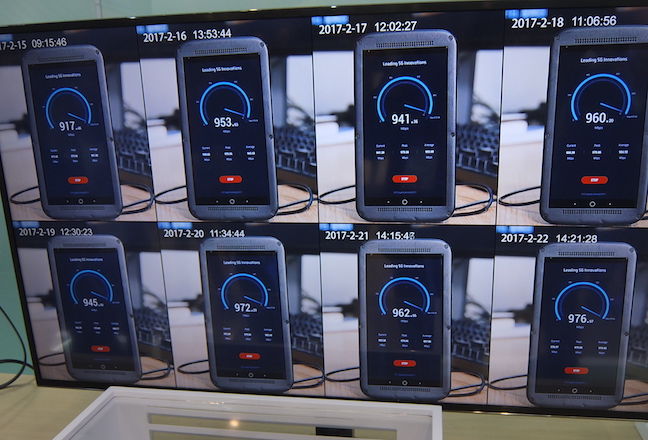 But if you spend any time on the MWC floor, a few things become painfully apparent. Not only is 5G still a long way away, but the industry is having real trouble finding compelling cases even for 4.5G, or gigabit LTE, let alone 5G. As a brief note by Kester Mann at CCS Insight put it: "Operators struggle to identify uses for 5G."

My former colleague Bill Ray, now at Gartner, recalls video being touted as a demand driver for GPRS. You may mock in disbelief, but it really was. That didn't happen. Then video would drive demand for 3G, we were told. But video calling was still pretty awful. Then it would drive demand for HSDPA. And then 4G.

And you could hear plenty of people saying that of course we'll need 5G's bandwidth to watch UltraHD 4K and 8K videos. But on a pocketable mobile display, you can't tell the difference between an HD video and a 4K video. I don't mean "you can't really tell the difference" – you genuinely can't. The limited screen real estate ensures that there is no incremental advantage to a 4K video on a 4K mobile display. None at all. The operators and equipment vendors know this, so new use cases are being touted.

So HD video won't bring in the punters. It will be AR (augmented reality), or VR (virtual reality), right?

T-Mobile and Ericsson made a big announcement, show VR, worn by what another former colleague called "Spanish Shingy".

(This is the original Shingy, by the way – AOL's "digital prophet". If you click this, I take no responsibility for ruining your lunch.)

Deutsche Telekom announced a partnership with Zeiss for connected glasses. These might even replace the smartphone, DT's CEO Tim Hoettges predicted. 5G is needed for this. Well, AR is already here and wildly popular in the form of Pokémon Go. But a more realistic appraisal needs to account for how far away we are from always-on wearable AR that's usable and practical. And it must also account for the social stigma still associated with "glassholes".

These days it's important in social situations to show that you're not using technology – people have got much better at leaving their phones in the pocket over a lunch, I've noticed. That would be impossible with nerd goggles.

So AR is not clearly not a panacea. Perhaps more conventional mobile gaming isn't either. And while ZTE staff were keen to tell me that a gigabit phone means cloud storage becomes as accessible and convenient as local storage, I can't see it replacing cheap local flash memory... which only gets cheaper every year.

Q: Why is everyone talking about 5G now?
A: Because the equipment vendors want to.https://t.co/ahxJPvbj6W

As Kester Mann concluded: "Network operators appear little closer to identifying solid uses or business cases for introducing the technology. Indeed, at the press event for the Next Generation Mobile Networks (NGMN) alliance, attended by CCS Insight, there appeared to be almost a consensus that a 'build it and they will come' approach will prevail.

"Despite much hype at this year's event, many of the early services touted for 5G networks will actually be more than adequately served through existing LTE infrastructure."

For years already, 5G has been trying to be all things to all people. A low-power backbone for IoT and "smart cities". A high-bandwidth highway for VR and games. But despite lots of very clever people thinking very hard, no compelling reason has emerged to answer the question, "Why 5G?"

See you next year, El Shingy. Maybe you'll think of something eventually. ®