IDC says its numbers for the total worldwide enterprise storage systems category for the fourth 2016 quarter show that:

However, in the external enterprise storage systems market, we are given top-five vendor information by IDC. Here it is tabulated (revenues are in millions). 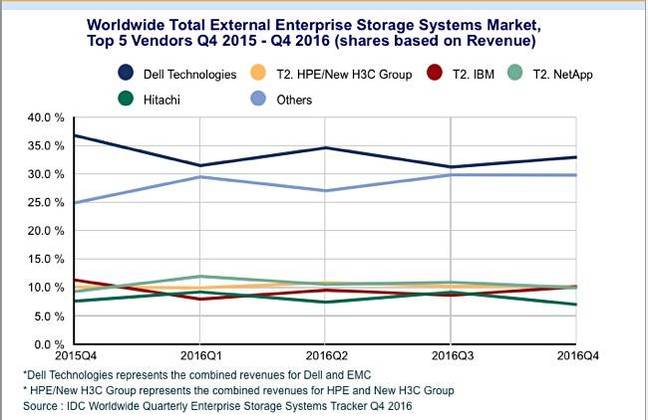 Having bought EMC, Dell Technologies now wipes the floor with everyone else. As this market shrank by 7.8 per cent over the year, Hitachi, IBM and Dell did worse than the market, HPE roughly tracked it, NetApp did very well comparatively, while the Others category grew 10.2 per cent.

This decline in external storage revenues for Dell provides some context for its decision to end-of-life DSSD. Even top dogs have to cull their pack sometimes. ®

Singapore, Dell do a pandemic-era elbow bump, open IT giant's first-of-its-kind 'innovation hub' outside US