WD has extended its disk-based archive array line scaling out to 52PB with a newish X100 ActiveScale product. This arrived in January with no fanfare and holds 47 per cent more data than the largest SA7010 Active Archive product. What gives?

The first ActiveScale product arrived in November 2016 and was a middling capacity P100 which scaled from 720TB to 19PB (raw).

We looked at WD's online data sheets for the ActiveScale and Active Archive products and, together with WD, built a comparison table: 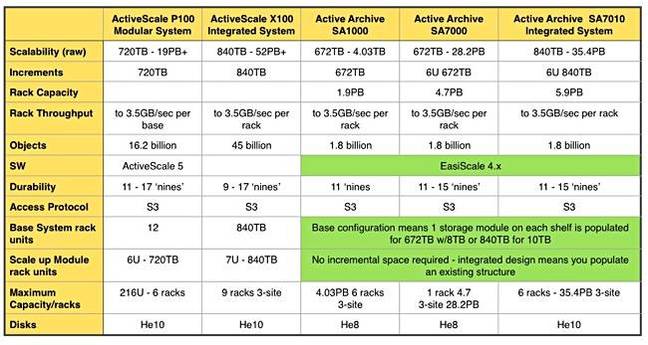 As for whether a user would need three separate sites in a linked configuration to get the maximum ActiveScale and Active Archive capacity, they said: "Scale-out does not require different sites. Geo-spreading is a scale-out configuration with different erasure encoding that allows the loss of a site, and still have full object availability from the remaining locations."