The future of storage is ATOMIC: IBM boffins stash 1 bit on 1 atom

Molecules are so yesterday – IBM boffins at Almaden have cracked atomic storage, magnetising a single atom and storing a bit of data on it.

The atom in question was a Holmium atom, a silvery-white metal and a rare earth, lanthanide element. It also has the highest magnetic moment of any naturally occurring material.

A Holmium atom was attached to a magnesium oxide surface, which stabilises its north and south poles and resists disturbance from nearby magnets. Bit values of 1 and 0 are defined by the magnetic pole orientation.

An electric current exchanges the atom's poles and is provided by the metal needle tip of a scanning tunnelling microscope, and this is how a bit value is written. The bit value is read by tunnel magnetoresistance, measuring a current passing through the atom using the quantum mechanical spin resonance effect with a single iron atom used as a sensor.

How this is done is covered in a Nature Nanotechnology paper, "Atomic-scale sensing of the magnetic dipolar field from single atoms".

The scanning tunnelling microscope used here, described as a nanoscope, is cooled by liquid helium to allow the atoms to retain their magnetic orientations long enough to be written and read reliably. It also operates in extreme vacuum conditions to eliminate interference by air molecules and other contamination. 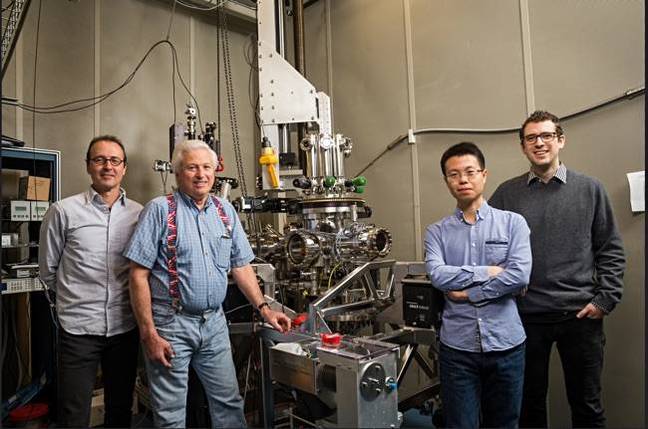 How long do the atoms retain their bit values? In the paper's abstract the boffins write: "We demonstrate the reading and writing of individual Ho atoms on MgO, and show that they independently retain their magnetic information over many hours."

The boffins show that two magnetic atoms could be written and read independently when separated by one nanometer.

This means if a device using such storage tech could be built, it would be 10,000 times denser than today's disk drives and SSDs.

Dr Andreas Heinrich, from the Institute of Basic Science (IBS) in Korea and former IBM researcher, said: "It doesn't get any smaller than a single atom. This is the ultimate storage feat – one bit on one magnetic atom. We're excited about the potential for dramatically different storage that's more compact and robust than anything we've previously seen."

This is a fantastic achievement but don't get your hopes up of having credit card-sized devices storing the equivalent of 35 million iTunes songs just yet. There are decades of research and engineering work needed to find out if this atomic-level storage can be developed into usable technology.

A follow-up paper, "Reading and Writing Single-Atom Magnets" by IBM’s boffins, is set to be published in Nature soon. ®