Kaspersky launches a range of perfumes to, er, defend your odour

Hot on the heels-emblazoned-with-Eugene's-face, Kaspersky has only gone and sent El Reg a range of branded toiletries, presumably meaning to imply we could brush up on personal hygiene.

Well, we quite like our powerful and distinct olfactory identity, which of course is what we use to attract our vulture brethren, but we appreciate Eugene's kindness in including us within his #ThreatDeToilette campaign, featuring a number of scents, including Social Enginoir, Mal-wear, Ransom (reassuringly expensive), and Phish.

The luxuriously bottled toiletries arrived directly from Kaspersky's secret Russian laboratories to our door, and are not rebadged yokes from Options Ltd. Nope, absolutely not.

There is a rumour doing the rounds that there's a little bit of Eugene's DNA in every sample sent out, though this may have been caused by a misreading of the ingredients which include Eugenol, a common phenylpropene included in perfumes. 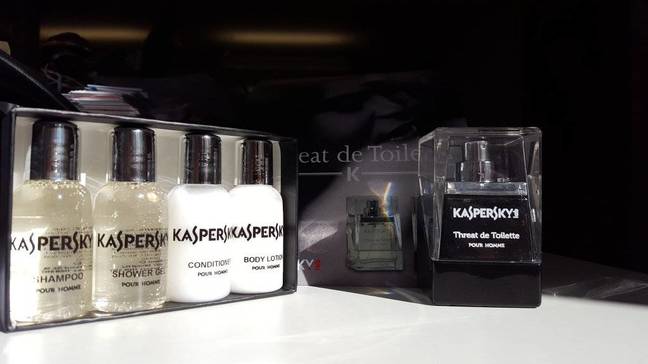 “Fear awakens our senses,” explained David Emm, Kaspersky Lab's principal security researcher, who is the "face of the new scent" apparently, although we can very definitely confirm that Emm is neither of the models in the brochure.

“The men and women who wear Threat de Toilette understand today's online threats and protect themselves against them,” Emm continued. “Fear is no longer felt only in the physical world – it's all around us in our connected lives too and we need to make sure we're constantly protected.”

Eugene's emission comes as we await the release from opaque transparency organisation WikiLeaks of the CIA's views on Kaspersky software. Hopefully the CIA's opinion of Kaspersky will be higher than that of F-Secure, which it said "has generally been a lower tier product that causes us minimal difficulty". ®