NASA's atom-chiller ready to fly to the ISS

Plenty of readers will agree that the International Space Station would be a cool place to work, and it's getting cooler: a billionth of a degree above 0K (in a very small spot).

If all goes to plan, August's SpaceX CRS-12 supply mission to the ISS will carry NASA's long-planned Cold Atom Laboratory, an experiment to help understand extreme states of matter, gravity, and maybe even dark matter.

The experiment aims to create a Bose-Einstein Condensate (BEC) – a state in which baryonic matter (that is, ordinary matter) displays quantum characteristics. As the lab explains, the matter in a BEC takes on a wave-like nature.

BEC experiments have been conducted on Earth (leading to a total of six Nobel prizes), but gravity makes it hard to maintain the BEC state for more than fractions of a second. NASA boffins think that in the microgravity prevalent on the ISS it might be possible to sustain it for 10 seconds or more.

What's this got to do with dark matter? Glad you asked: as NASA explains in this blog post, a BEC can be thought of as a “superfluid” in which the atoms move around without friction.

For as long as the BEC state lasts, kinetic energy added to it isn't lost to friction, so even the minuscule energy it would get from an interaction with passing dark matter might be observable. 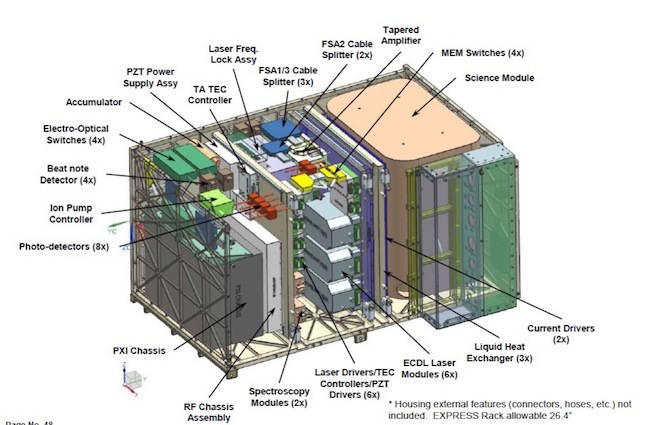 Getting atoms like rubidium and potassium (which the experiments will use) down to that temperature needs a lot of kit.

Laser cooling comes first. From the Cold Atom Lab: “At resonance the photons impart momentum to the atoms. If the photon frequency is Doppler red-shifted from resonance then only atoms coming towards the laser beams will be affected. Those moving away from the laser will be unaffected by the photon flux. If laser beams are such that they are coming from all directions the atoms will be cooled from all directions”.

That gets you to around 100 microKelvin, but the target temperature is a picoKelvin, so more has to be done.

The second stage is to subject the atoms to a radio frequency field. This “evaporative cooling” energises only the atoms above a certain energy level, leaving cooler atoms behind – in other words, you boil off the atoms you don't want.

Finally, there's adiabatic expansion: allow the (tiny) cloud of atoms to expand, which cools them further. ®