There's nothing for it but IPv6. And potentially new kit

Verizon Wireless will soon stop issuing public static IPv4 addresses to its business customers “due to a shortage of available addresses.”

Instead, it will dish out persistent prefix IPv6 addresses. If you're a Verizon customer and you need a static public address for an IPv4-only device, you'll have to replace that hardware with something that's IPv6 compatible (and not from the tech Stone Age).

The US carrier has written to customers to inform them of a June 30, 2017 deadline after which it will be IPv6 or bust for those who want to assign anything a fixed public IP address from Verizon Wireless.

As we've often reported, the 32-bit IPv4 address space is finite. In 2015, North America had just 1,024 public addresses left, and in mid-February this year, the internet registry for Latin America and the Caribbean revealed it is down to just 4,698,112 available addresses. While resale of unused public IPv4 addresses is possible, although hardly anyone wants to give them up. And even colossal concerns like Verizon are clearly struggling to buy more.

IPv6 has a theoretical 2128 addresses, a 39-digit number. Not every single address in that space is available, but it's suffice to say IPv6 is so big, the prospect of running out of addresses doesn't trouble even the most optimistic internet of things advocates, who predict 500 billion active devices any year now.

But it takes work to wrap one's head around IPv6 and get ready to deploy it, hence continuing enthusiasm for IPv4 and technologies like Network Address Translation (NAT) that tuck devices behind a single address. 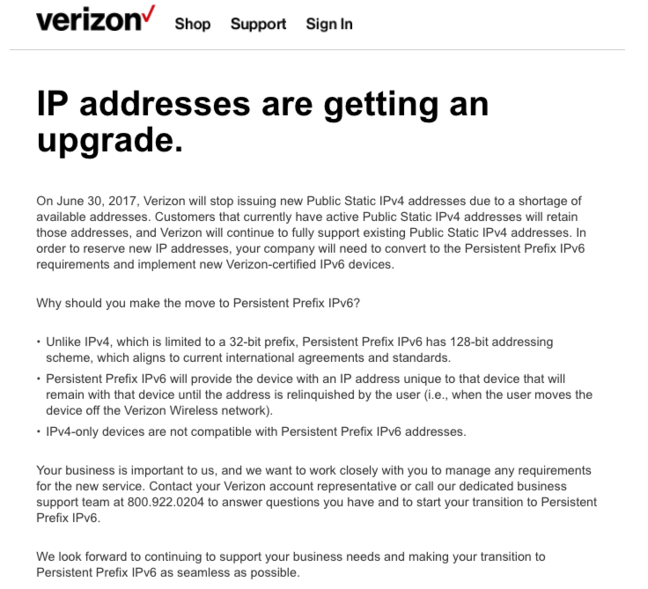 Which means organisations with ongoing need for static IP addresses now have the prospect of getting up to speed with IPv6 fast, and then figuring out if they want to run mixed fleets of IPv4-and-IPv6-capable devices.

Have fun picking this one apart, people. ®