This is where UK's Navy will park its 65,000-tonne aircraft carriers

The UK Ministry of Defence has spent around £200m rebuilding a jetty at HM Naval Base Portsmouth ready for the arrival of HMS Queen Elizabeth later this year. El Reg got invited to watch an American supply ship test it out.

As the picture further down this story shows, the planned exercise involving US Naval Service ship Robert E Peary was postponed because of fog – leaving a rather cold and soggy press pack standing around gazing at... well, damp concrete.

And what a load of concrete it was. The two new jetties for the UK’s two new aircraft carriers, HMS Queen Elizabeth and HMS Prince of Wales, has cost Blighty’s taxpayers the thick end of £100m. The one we were shown was built on top of various older structures dating back to the 1920s, as Captain Iain Greenlees RN, HMNB Portsmouth's infrastructure lead told The Register.

VolkerStevin engineer Gerrit Smit added that around 220 piles had to be sunk into the harbour floor to support the giant concrete raft, which moves up and down an inch or so as the tide ebbs and flows. One of the new jetties will be used as a “pit stop” for the active carrier, while the other will be optimised for longer stays; the rough idea is that once each ship passes her sea trials, one will be deployed while the other sits in reserve. Extensive dredging work is still being done at Portsmouth to ensure the carriers can manoeuvre safely, with a German WWII bomb being fished up from the deep just three weeks ago.

Due to the planned arrival of the American ship, the jetty was being operated live as part of a full-scale dress rehearsal. This included two armed policemen toting Heckler und Koch MP7 sub-machine guns in the terminal building being used for the press event your correspondent attended, putting on their very best “I’m doing an important job” faces as the snap-happy press pack walked down the empty naval equivalent of the passport queue. There our press passes were checked by a studious BAE Systems dockyard worker before we were let out into a holding pen on the jetty itself. This was the inspiring sight that greeted our eyes: 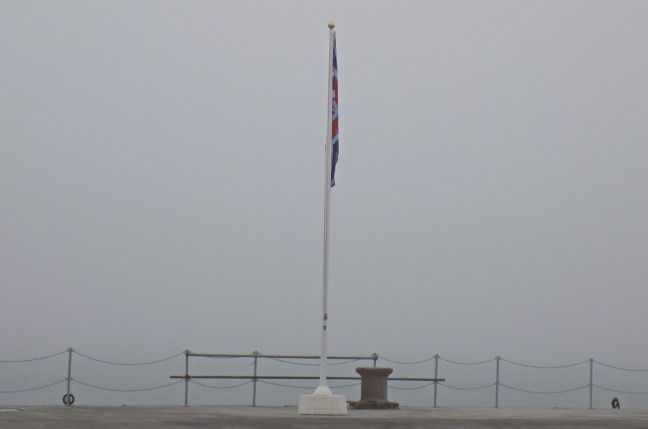 It's a Union Flag. And a mooring bollard. That was it

“It’s all about the people,” Commodore Jeremy Rigby, Naval Base Commander Portsmouth, told The Register. “A dress rehearsal is much more effective than doing it on paper.” Although USNS Robert E. Peary was still offshore, waiting for the fog to burn off and the tide to fall and rise again, Cdre Rigby emphasised how his people were nonetheless still gaining valuable experience needed to safely bring the 40,000-ton supply ship alongside – “how far out to anchor, harbour control, reconfiguring tides and ensuring she has a fresh workforce [on the jetty, the anticipated docking delay being in the region of six hours].”

Beyond the obvious, the jetty is one of the largest dedicated single mooring points in the UK. It includes auto-tensioning bollards for the carriers to be moored to – a first for the Royal Navy, we were told, removing the need for teams of sailors to slacken and tighten mooring lines as the tide rises and falls. The QE-class carriers will overhang the jetty by around five metres once snug against its fenders.

Along with the jetties come the brows (great big ramps) for moving people and equipment on and off the carriers. These will happily carry around 500 men per day while the ships are alongside, we were told, against 100 per day for the old Invincible-class aircraft carriers’ brows. The QE-class are almost double the size of the Invincibles. In terms of storing ship, BAE Systems’ Chris Alcock, support projects manager for the QE Class programme, assured the press pack that the brows would be capable of handling one 20-foot ISO container every six minutes. Simulated stress tests had also been carried out, with Hampshire Fire Brigade to be invited along for familiarisation training.

Like the dockyard equipment, a relatively large amount of automation is built into the brows, which will be self-levelling and self-adjusting, removing the need for teams of sailors to physically manhandle them after they are placed in position. All in all, it will need just 20 people on the dockside to bring a 75,000-ton QE-class aircraft carrier alongside.

The jetty also carries the final stage of the giant electrical supply cable which will power the carrier while she’s alongside and her own generating machinery is shut down. The supply is taken from the main National Grid feed into Portsmouth, at 11kV, and, via a local converter which takes it up from the standard 50Hz to the carriers’ 60Hz, plugs into a giant receptacle on the side of the ship. An automatic gantry carries the cable, paying it out and retracting it as the ship moves with the tide. The automatic retraction feature is disabled by software, we were told, if the ship sails with the cable still attached – a bit like a petrol pump cutting off if an absent-minded driver leaves the nozzle in the fuel tank while driving off.

“95 per cent of what we need in the UK comes by sea,” observed Cdre Rigby. While the £6bn total cost of the two carriers and the £1bn or so spent on infrastructure around the UK for the two ships seems like a helluva lot of cash, it is ultimately sea power which ensures that mobile phones, laptops, servers, even your mouse mat, reaches the UK on time and thus at a reasonable price.

Maritime shipping from the Far Eastern countries which make virtually everything our island nation depends on to function must pass through a number of choke-points (such as the Strait of Hormuz) that could otherwise be easily dominated by a nation wanting to make a point about Britain’s vulnerability, and once she is operational HMS Queen Elizabeth will be deploying to the South China Sea. This is partly to fly the flag in a part of the world the UK has traditionally had little presence in, partly a thank you to the US Navy for training the UK’s future aircraft carrier and F-35 crews (QE will be taking the place of a US carrier’s normal deployment), and partly to safeguard Britain’s own interests, keeping the seas open for lawful commerce to flourish.

As the UK leaves the European Union, keeping the lifeblood of commerce flowing freely will become more important than ever before. This otherwise uninspiring raft of concrete on the South Coast plays a vital part in that mission. ®