+Comment It is only one quarter, but IDC’s latest enterprise storage numbers show IBM’s flash array revenues have overtaken those of Pure Storage, putting that IPO’d company in fifth place in the market.

Here’s a Stifel-produced chart of vendor all-flash array revenues based on this data, showing that IBM has overtaken Pure: 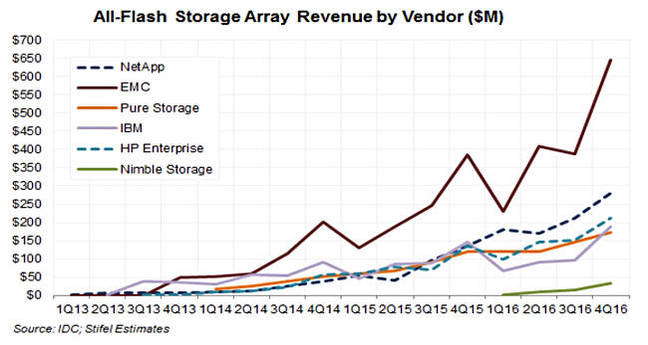 We see that HPE plus Nimble would be $237.2m, putting HPE closer to NetApp.

Two thoughts: firstly, Pure Storage needs its FlashBlade unstructured data storage array to be successful if it is to grow its AFA revenue market share status and overtake IBM. Secondly Hitachi Data Systems, out of all the incumbents is in the least good position. Perhaps there will be product news forthcoming this year to try to fix this.

HDS has bought companies in the past to gain technology in areas in which it is lacking, such as BlueArc for NAS and Archivas for object storage. Perhaps this lagging position in AFA is a pointer to a potential acquisition? ®