Analysis An analyst poring over IDC’s fourth 2016 quarter server stats has found that Cisco is slipping, and white-box manufacturers and China-based vendors are overtaking the historically dominant US server suppliers.

Stifel analyst and managing director Aaron Rakers sees a current decline in server shipments due to “a pause in demand ahead of Intel’s Skylake Purley refresh in 2H2017.” There is underlying growth in the server market though, driven by non-traditional server vendors.

He estimates that Chinese server suppliers Huawei, Inspur, and Sugon server shipments were growing 44 per cent, 20 per cent, and 11 per cent respectively over the same timeframe, and charted the IDC historical numbers to show a surging ODM and Chinese server vendor market share rise over many quarters: 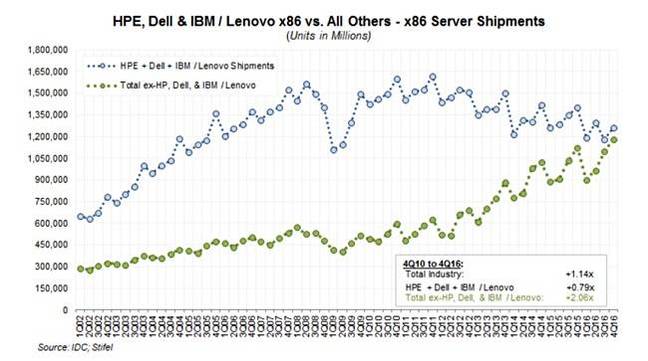 What Rakers has done here is graph a line showing HPE, Dell and IBM/Lenovo server shipments and a second line showing the total server shipment numbers, minus HPE, Dell and IBM/Lenovo. This enables us to see how the big three have been steadily losing market share since the fourth 2011 quarter, and they have lost share while the collective other suppliers – this means white boxers such as Quanta and the three big Chinese vendors Huawei, Inspur and Sugon – have gained it.

Unfortunately we don’t have access to the numbers which would show how China’s big three – Huawei, Inspur and Sugon – are doing as a trio versus the ODM/hyperscale suppliers from Taiwan.

Rakers suggests we should pay attention to:

He expects the third trend to continue to increase going forward.

This implies that Cisco has not focussed enough on rack server product business, being too wedded to its blade server form factor.

Are the trends shown in the chart above reversible? If volume manufacturing is the key to lower costs then no, they are not, and Cisco, Dell and HPE face a steady and relentless erosion of their market share.

Perhaps they should embrace the idea of downwards vertical integration and try to buy Quanta. After all, Seagate and Western Digital own their disk drive supply chain with component plants all over the Far East. If this works for US disk drive vendors then why not for US server vendors?

Lastly, it is strange that China-based Lenovo saw a fall in its shipment share. Possibly this was because its acquired IBM x86 server business is geographically strong outside China, and Lenovo has not been able to grow its revenues in China enough or to ship servers to hyperscale customers enough to compensate for declines elsewhere. ®