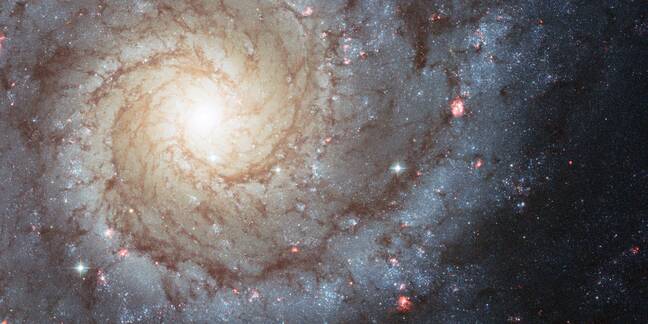 The mystery surrounding dark matter deepens: scientists have discovered that the puzzling substance was less dominant in our universe's early galaxies.

Although no one knows what dark matter is made out of, physicists generally agree that it exists, and that it can be observed albeit indirectly.

In the 1970s, astronomers spotted stars traveling faster than expected while orbiting at the edge of spiral galaxies. This stumped eggheads everywhere. The burning balls of gas were not following the mathematical models as expected. This gap between theory and observation could be closed if boffins took into account an invisible mass that pervaded the outer regions of elliptical galaxies. That invisible mass is what we today call dark matter.

No one can say for certain what dark matter is – although it's handy in that it helps scientists explain why things don't move the way they should through space.

Curiously, the latest observations from the European Southern Observatory's Very Large Telescope show there is less dark matter in galaxies that formed ten billion years ago – during the peak of galaxy formation – compared to newer galaxies. Again, this has stumped scientists.

"We were expecting that massive early rotating disks would be dominated by dark matter on the galactic scales, in analogy with typical spiral galaxies today like our own Milky Way. This is what causes the rotation velocities to remain constant in the outer parts of today's spirals," Natascha Förster Schreiber, a researcher at the Max Planck Institute for Extraterrestrial Physics, Germany, told The Register this week. On Wednesday, a paper cowritten by Förster Schreiber and many others was published in Nature, and it details a study of the large telescope's dark matter data. (There's a copy here on Arxiv.)

"Instead, we saw the velocities drop in the distant disks we studied, which indicates that dark matter is less influential on galactic disk scales at early times."

If the findings are correct, it could provide a clue to how galaxies evolve from shapeless blobs to the complex spiral structures we see today, Mark Swinbank, who was not involved with the study and is lecturer at Durham University, UK, told The Register.

"Since the dark matter mass fraction is large in local galaxies, it has the effect of stabilizing the disk through gravity," he said.

"And this is probably one of the main factors that allow the galaxies to transform from very irregular, unstable and clumpy galaxies with high star formation rates that we see in the distant Universe to the (relatively quiescent) grand spirals and massive spheroids that we see in the local Universe." ®