Microsoft really wants those MongoDB devs to move to DocumentDB

Mongo's wire protocol gets support, and there's a new connector for Spark too

Microsoft reeeaally wants MongoDB developers to get onto Azure, and as such has announced support for Mongo's wire protocol for those who've declined offers to migrate to DocumentDB.

Adding support for MongoDB's wire protocol – the protocol by which the open-source software gets data from point to point – will now allow existing applications built on top of MongoDB to target DocumentDB while continuing to use their existing client drivers and toolchain.

With the looming threat from DocumentDB's managed service offering, MongoDB recently announced a free tier for its DBaaS offering Atlas.

Microsoft will be hoping that its support for Mongo's wire protocol will lower the bar to migration by allowing developers to use the MongoDB APIs while moving onto its own services, which it has of late been quite happy to claim are superior at some length and in some style.

Following its security investments in Azure, Microsoft's Rimma Nehme, architect at the open-source software analytics and NoSQL group, provided a sophisticated visual guide comparing the services' relative security, which we reproduced at the time and will do again: 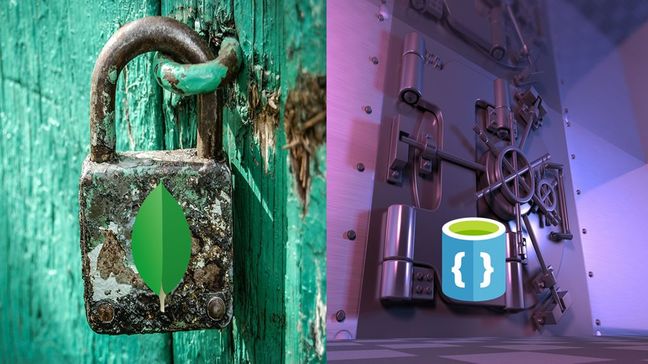 DocumentDB is described by Microsoft as “our planet-scale fully managed NoSQL database service” and has has been one of the fastest growing services on Azure since its general availability in 2015.

The corporation describes DocumentDB as “one of the foundational services of Azure,” which has been used “virtually ubiquitously as a backend for first-party Microsoft services for many years” although it's arguably not nearly as virtually ubiquitous as MongoDB itself.

Also announced at Strata was a new Spark connector for DocumentDB, enabling Apache Spark fans to get on with their real-time data science and data exploration mischief while using DocumentDB.

The Spark to DocumentDB connector uses the Azure DocumentDB Java SDK, and will exploit the native DocumentDB managed indexes. It enables update-able columns when performing analytics as well as push-down predicate filtering. ®