They're from the government, and they're here to help

The National Cyber Security Centre has ineptly tried – and failed – to Rickroll someone taking the piss out of them on Twitter.

A question and answer session organised by the NCSC on Twitter featured, for reasons nobody understands, “sociotechnical security experts” responding to the great unwashed’s inane queries on the controversy-stricken microblabbing website.

“What the fuck is a sociotechnical security expert and where do I get this made up qualification?” asked one user, who goes by the in-joke handle of Bobby ‘Tables.

As the picture below shows, this did not go to plan. 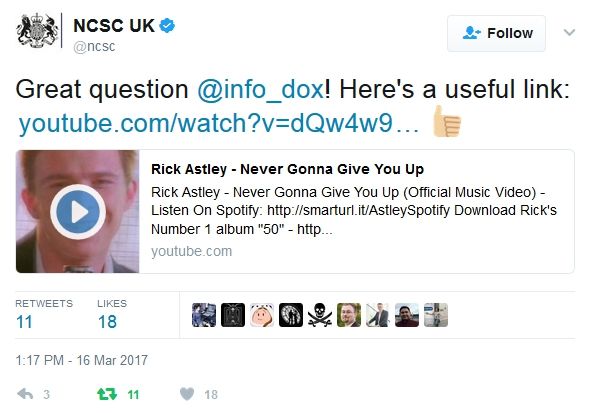 For anyone who’s been living under a rock (or waiting for a ZX Spectrum Vega+), Rickrolling is when you trick somebody into clicking on a link to Rick Astley’s Never Going To Give You Up. The key part is that it has to be a trick. Revealing the link’s destination before your target clicks it is an epic fail, as da yoof say.

Evidently the NCSC was trying to play a harmless prank. That’s not a problem – but if the monolithic state infosec organisation’s “sociotechnical security experts” don’t understand how straightforward social media sites work, what hope for national web security when they’re let loose on real technology? ®

Little Bobby ‘Tables has a long and entirely dishonourable history amongst those who break databases for business or pleasure. Some joker registered a firm with Companies House back at the end of last year with this name: