£500,000 pledged by thousands on Indiegogo, yet still no product

None of the original Indiegogo crowdfunding backers have received the ZX Spectrum Vega+ console they pledged money towards, and promised deadlines – including the most recent one of February 2017 – have passed without products being delivered.

Retro Computer Ltd (RCL) managed to raise more than half a million pounds through Indiegogo before the campaign was frozen, though the crowdfunding site stated that backers pledge cash towards an idea rather than paying for a specific item. The Register understands that the £500,000 has been handed by Indiegogo to RCL, meaning backers seeking refunds must now deal directly with the company rather than the crowdfunding website.

Indiegogo confirmed to The Register on 13 March that RCL’s campaign had been suspended “for delivery delays and a lack of communication with backers.”

Suzanne Martin, MD of RCL, told us that the P&L accounts filing with Companies House is delayed because former RCL director Paul Andrews is “withholding” information – and alleged that the firm’s previous accountants, who also handled Andrews’ affairs, told them to get a court order if RCL wanted its accounts.

Andrews said this was nonsense, adding that he had handed over all relevant documents when he parted ways with RCL in April last year. The accounting firm told us that in the five months it was associated with RCL it did not need to file any annual statements or similar on its behalf. Emails seen by The Reg suggest that all relevant information was handed over.

Two years ago RCL delivered its original ZX Spectrum Vega remake, with its initial 1,000 units selling out very quickly. The Vega+ is a new device with an integral screen and more buttons. It looks vaguely similar to the Sony PSP handheld console.

A brief history of the Vega+ project

In February 2016 RCL, with support from ZX Spectrum daddy Sir Clive Sinclair himself, began its Vega+ crowdfunding campaign. The Register understands it came about in part because sales of the original Vega were lower than forecast and had left RCL with debts to clear. A month later they had received pledges for £360,000, as El Reg reported at the time. RCL’s team of directors when the campaign started were original MD Paul Andrews, David Levy, then-CTO Chris Smith and Sinclair Research Ltd, Sir Clive's corporate presence.

In mid-March Andrews, Smith and a third party, Darren Melbourne, told Levy they would be collaborating on a Commodore 64-based project without Levy’s involvement. RCL’s position is that the trio had previously agreed to work with Levy and RCL on the new project and that not involving Levy would be a conflict of Andrews and Smith’s legal interests as directors of RCL.

It was this falling-out which triggered the whole saga.

Andrews and Smith resigned from RCL in April. Both kept their shareholdings in the business (of 25 per cent each) and Smith retained the intellectual property in the Vega and Vega+ firmware. He offered it to RCL for £20k but the company refused to pay, so he withdrew the offer. A couple of months later RCL paid him £10,000, claiming that this was enough to cover it, but the company had already started trying to find alternative firmware. Smith's consistent position has been that the £10,000 was effectively paid to him without his asking for the money. The Register understands that the £10k was eventually counted towards paying off other debts RCL owed to Smith. RCL appears to have moved on, though Martin claimed to us that the sum was still disputed.

Later in April Janko Mrsic-Flogel and Suzanne Martin were appointed as directors of RCL, something opposed by Andrews and Smith on the grounds that as shareholders with 50 per cent of the company’s voting rights, they had not consented to the appointments.

June saw Private Planet Ltd brought on board to develop new Vega+ firmware. Its chief exec, Janko Mrsic-Flogel – the new RCL director, who The Register understands is a long term associate of Levy’s – said at the time: “The first new development for Retro from my team at Private Planet is a completely new firmware for the Vega+. I hope this will be followed by other exciting developments next year.”

August saw Andrews and Smith issue a stinging press release in which they alleged the new directors of RCL had been spreading “lies and disinformation about us” and claimed they were owed £80,000. RCL’s David Levy denied the allegations in a rival statement. In that he made the counter-allegation that funds had gone missing from RCL while Andrews and Smith were in charge.

A statement in Levy’s name sent to The Register said: “RCL has asked him [Andrews] to return a sum of money to the company, which he has not done.” Andrews told El Reg this claim about money is groundless and did not form part of Levy’s public claims until much later.

“Neither he [Cooper] nor his company were ever entitled, under his company’s contract with RCL, to receive any of the sales revenues for the Vega.”

Cooper in turn told us that he suspended Vega royalty payments because of the dispute over who owned the intellectual property in the Vega firmware, on the basis that the outcome would determine who should receive them. The case between Cornerstone and RCL is ongoing.

September 2016 saw RCL announce the Vega+ would be available for purchase in the run-up to Christmas 2016. This did not happen.

In November RCL’s remaining directors attempted to seize Andrews' and Smith’s share holdings in the company. Andrews and Smith, exercising their powers as shareholders in accordance with RCL's internal rules, had previously objected to RCL's directors taking legal action against Cornerstone.

The Chancery Division of the High Court ordered RCL, David Levy, Suzanne Martin, Janko Mrsic-Flogel and webmaster Lee Fogarty to “not (whether directly or indirectly) declare the shares of the First Claimant [Paul Andrews] in the First Defendant [RCL Ltd], amounting to 25 per cent of the entire shareholding, to be forfeit” on 21 November 2016.

Another part of the injunction application would have restrained RCL, Levy, Martin, Mrsic-Flogel and Fogarty from "harass[ing], defam[ing], abus[ing], intimidat[ing] or incit[ing] hostility towards" Andrews and Smith, and also stopped them from "interfer[ing] with or hack[ing] the computers of the Claimants or any members of their families or any businesses which they have an interest in." Neither of these motions made it into the final injunction. Another motion that would have stopped RCL et al from "interfer[ing] in the relationship between [Smith] and his employer, Companies House" was also not brought forward.

In February 2017 Fogarty posted an update on RCL’s website saying: “The new Vega+ uses a version of FUSE - the Free Unix Spectrum Emulator, developed by Philip Kendall. The particular version of FUSE we’re using doesn’t run with UNIX, but runs under Linux.” An RCL spokesman said, in a recent telephone conversation with The Register: “It was a case of ‘right, it’s April, we’ve still got plenty of time, what can we do with the firmware?’, so they put FUSE on and it’s been there since the beginning.”

At the time of that conversation we had not yet learned that Janko Mrsic-Flogel had been brought in during June to develop new firmware.

A FUSE spokesman got in touch with The Register to point us to a statement dated 26 February 2017, in which the organisation said it was not aware that FUSE would be used in the Vega+ “until the end of 2016”. FUSE added: “One of the fundamental tenets of open source software is that there is no requirement to communicate use of the software, so this does not represent any breach of the GNU GPL by Retro Computers Ltd.”

People on both sides of the dispute have claimed to The Register that the police are investigating allegations of abuse and fraud. The BBC reported last week that RCL had made numerous claims to them about ongoing criminal investigations in an apparent attempt to persuade the corporation not to publish its article.

RCL claimed that the Metropolitan Police were investigating allegations of “physical threats”. The company was unable to provide a crime reference number and the Met was unable to confirm any allegations had been received, or whether any arrests had been made, based on the information from RCL.

Upon further questioning by The Register, RCL’s Suzanne Martin claimed that the Met press office was about to issue a statement on behalf of the company – something previously claimed to us, as well as to the BBC, last week – and added that other police forces were also investigating. She said the allegations were made on a non-specific date in August last year, which does not fit what El Reg was told last week by a different spokesman.

Andrews said he had reported threats he received to Bedfordshire Police and supplied us with the crime reference number he was given. The force confirmed from the number that it was a civil matter and therefore no arrests were made.

Where does that leave the backers, then?

The 4,780 people who pledged up to £100 each (and in some cases more than that) for a Vega+ console appear to be furious with RCL, judging from the majority of the 5,000 comments on the Indiegogo page.

Darren Sellars wrote: “Still waiting for my refund. Absolutely disgusted at the lack of communication here.”

A more optimistic supporter, Emma Jukes, added: “Some people are truly never happy. Complain when we don’t get updates then complain even more when we do. Personally, having previously asked for a refund, I’m getting more confident that things are finally moving forward now.”

On RCL’s Facebook page, other backers were not impressed with the company's progress. 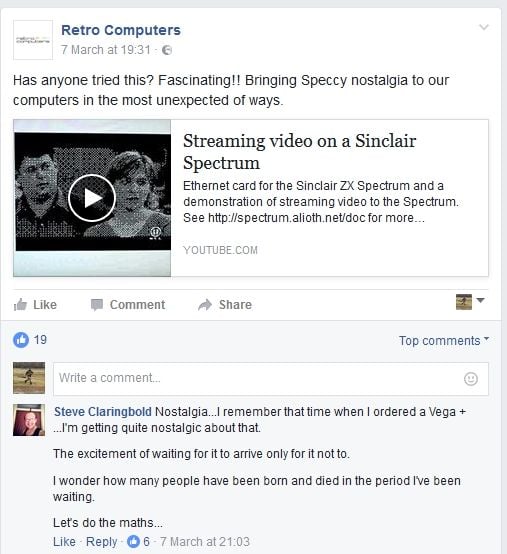 Speaking on behalf of RCL, Fogarty, has since posted pictures of what he said is a Vega+ onto the company website. Over on the Facebook page some backers are impressed while others remain sceptical. The company had previously posted that the Vega+s were delayed by their courier company. Similar excuses for non-delivery, including problems with the Vega+'s buttons, have been made in the past.

The Register has seen a closed Facebook group where some Vega+ backers shared experiences of asking for refunds and invoking section 75 of the Consumer Credit Act relating to credit card refunds and chargebacks. Andrews is an active member of it. An RCL spokesman described it as a “hate group”.

Comment: A sorry tale that leaves nobody looking good

If nothing else, this ongoing saga of infighting and repeated product delays highlights the potential pitfalls of getting involved with crowdfunded projects. While some backers are receiving refunds – RCL MD Martin characterised the number asking for refunds as “about 25 or so” – others have chosen to wait and see what the company eventually delivers.

While Martin denied to The Register that the £500,000 from backers had been spent on legal fees, she said that the money had instead been spent on "starting from scratch". Nonetheless, High Court lawsuits do not come cheap, with typical costs for a defended application for injunction alone normally breaking five figures. RCL is embroiled in at least two High Court actions.

What should have been a straightforward business proposition that delighted thousands who remember the halcyon days of 1980s gaming has been torn apart by claims, counter-claims, intrigue and more. Both parties are conducting this fight very publicly, to the evident frustration of backers who just want their gaming console.

The Register looks forward to seeing the Vega+ released to the market and the 4,780 backers receiving their goods. ®