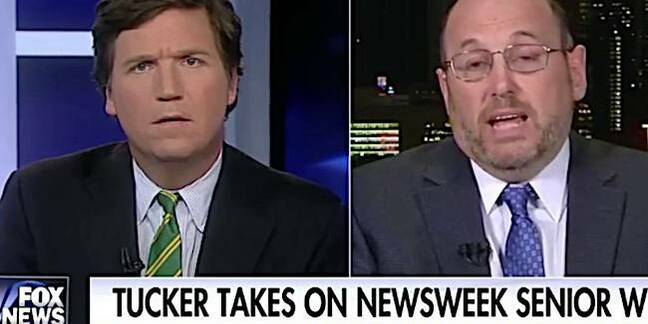 A man suspected of maliciously tweeting a GIF to a magazine writer that induced an epileptic attack has been collared by the FBI.

In December, Kurt Eichenwald, a Newsweek journalist who has written about living with epilepsy, appeared on the US Fox News show Tucker Carlson Tonight to discuss his claims that the then-President-elect Donald Trump had spent time in a mental institution.

That evening, Eichenwald received a tweet from pseudo-anonymous Twitter user jew_goldstein that contained a strobing image and the words: "You deserve a seizure." The image, we're told, induced an epileptic fit in Eichenwald, who lives with his family in Dallas, Texas. His wife later called the police when she pieced together what had happened.

On Friday morning this week, cops and federal agents arrested in Maryland a 29-year-old bloke who is thought to have sent the life-threatening tweet. John Rivello, from Salisbury, Maryland, was due in court today on charges of cyberstalking.

According to the US Department of Justice, investigators obtained a search warrant for Rivello's computers and found direct messages in his Twitter account to other people including the phrases "I hope this sends him into a seizure," "Spammed this at [victim] let's see if he dies," and "I know he has epilepsy."

They also got access to Rivello's iCloud account and found a screenshot of Eichenwald's Wikipedia page which had been altered to show a fake obituary with the date of death listed as December 2016. Also found were screenshots from the epilepsy.com website with a list of commonly reported seizure triggers.

"What Mr Rivello did with his Twitter message was no different from someone sending a bomb in the mail or sending an envelope filled with anthrax spores," Eichenwald's lawyer Steven Lieberman told Newsweek today.

Eichenwald asked Twitter to reveal the identity of jew_goldstein, his GIF-slinging attacker. However, his cyber-assailant filed a John Doe legal motion to gag Twitter, calling the journalist's lawsuit an "attempt to use his suit to chill the First Amendment and further embarrass and harass Doe."

As it turned out, Eichenwald's legal team found some other way to ascertain the identity of the tweeter. Lieberman revealed that Rivello is registered as a Republican, and was a student at Wor-Wic Community College in Salisbury until December 2014 but did not graduate.

Eichenwald said on Friday the suspect faces federal charges and is expected to be indicted by the Dallas District Attorney in the next few days. And the accused chap won't be the only one having their collars felt by investigators, the senior hack vowed.

More than 40 ppl sent strobes once they found out they could trigger seizures. Details of their cases are with the FBI. Stop sending them.

You can find the criminal complaint against Rivello, here.

Epileptic seizures can be fatal; your humble hack lost a fellow journalist and friend to the condition. You may joke to your mates that a flashing light or strobing animation gave you epilepsy. For tens of millions of people, a GIF could be the last thing they ever see. ®