Chipzilla want us thinking about queue depth and latency, not just raw IOPS

Intel has finally revealed an Optane product and told us how fast it will go.

The TL;DR version is that the “Optane SSD DC P4800X” will ship by year-end, starting with a 375GB product that has amazing computed random read IOPS numbers, and can work as memory or as storage.

Intel says the SSD is built with 3D Xpoint media, plus its own memory, controllers, interconnect IP and Intel software; we get it; wall-to-wall chipzilla tech makes the sucker go faster for longer, etc. It claims the P4800X has "an industry leading combination of low latency, high endurance, QoS and high throughput." IT has breakthrough performance, predictably fast service, is responsive under load and has "ultra endurance."

Intel is pleased with the P4800X's latency under load, saying it's much better than its previous DC P3700 SSD, with a chart to prove it; 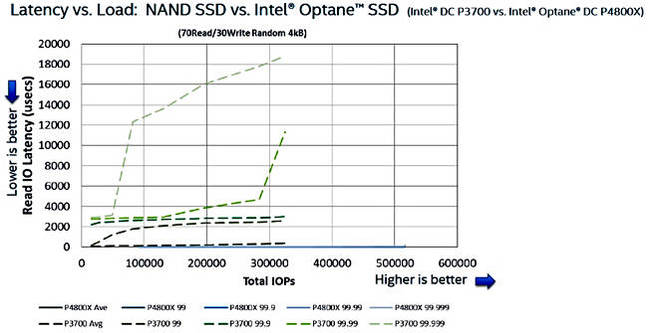 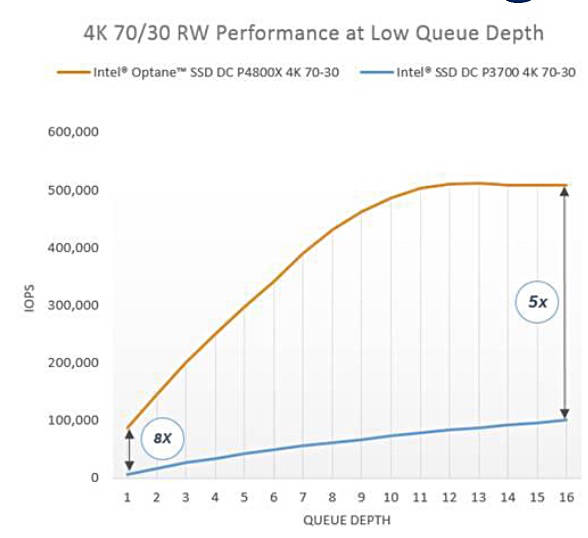 We’ve built a table comparing the two drives, using Intel-sourced numbers for the P3700 and then calculating the P4800X numbers using the Intel briefing multiples in the slide below. 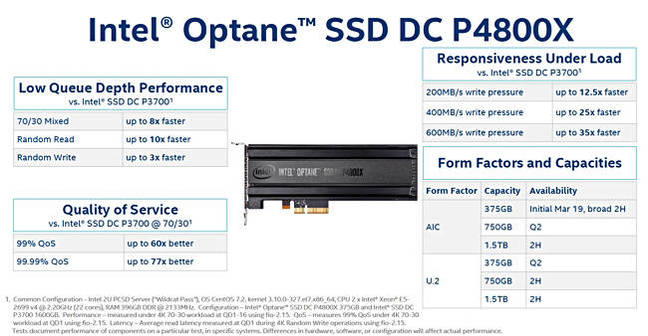 All table numbers are “up to.” P3700 quality of service data can be found here and we’ve used the 400GB capacity write number. We were unable to find P3700 responsiveness under pressure numbers. 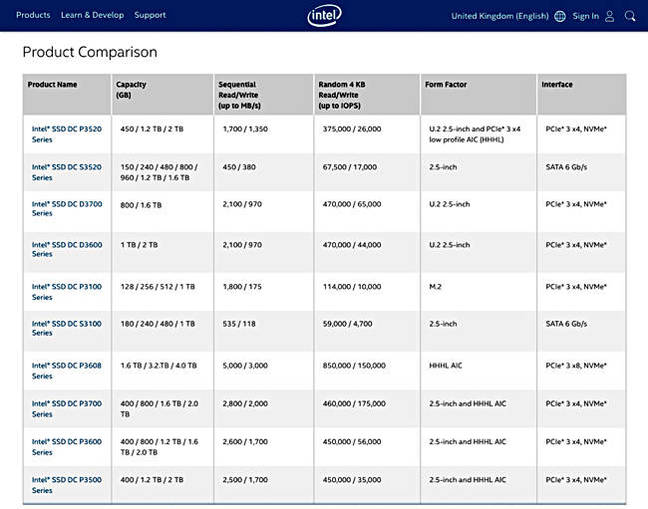 Perhaps computing a number from two "up to" numbers is taking us some way away from the real world?

An expert technology exec who has been close to 3D Xpoint commented;

As for Intel's claims, they are plausible. 3D Xpoint is certainly fast enough media. The question is, can their controller/firmware provide such a figure? The world's best NAND devices are around 1 million 4K random reads, at high queue depth loads. NVMe allows 64K queues each of 64K depth, and to the extent Intel has leveraged that capability, 4.6 million is certainly not out of the question.

We have asked Intel to verify it and a spokesperson said;

With regard to the QoS the improvement of 60x at 90 per cent and 77x at 99.99 per cent means the difference between the two percentage levels is reduced, which is a good thing.

Intel suggests the P4800X is used as fast storage and cache or to to bulk out DRAM, with its PCIE 3D NAND SSDS providing a tier of storage below Xpoint. Future Intel Xpoint DIMMs will also increase the memory pool in a server.

The company also claims that the DC P4800X integrates transparently into memory subsystems, thanks to “Intel Memory Drive Technology” that loads after the BIOS but before the OS. That software makes it possible to create a single pool of memory comprising DRAM and the P4800X SSD to emulate a single volatile memory pool. This will work on any OS, but does need a Xeon CPU to make the magic happen.

Optane SSDs can provide DRAM-like performance, it says, in select applications, such as ones with matrix multiplication with optimised data locality. Chipzilla's keen to point out Optane will be cheaper than DRAM, too.

Listed OEMS for the DC P3800X include Dell EMC and HPE, both of which plans to use it as a tier of cache, plus Lenovo, Nutanix and Supermicro.

As for how the P4800X' performance compares to Intel's original 3D XPoint performance claims - such as being 1,000 times faster than flash with up to 1,000 times flash's endurance and 10 times denser than conventional memory - we're bored with the whole farrago and don't intend to go there.

For now Intel is only shipping the DC P4800x to special friend. Broader availability will start in the second half of this year; a 6-month window. The detailed availability info is;