Citrix has revealed a little more about XenApp Essentials, its replacement for the Azure Remoteapp application publishing service that Microsoft killed off last year.

We wrote about this product just yesterday, because its sibling XenDesktop essentials appeared unheralded. XenApp Essentials had been promised for delivery in the first half of 2017, yet barely a squeak had been heard about it.

We still can't tell you much about the product, but Citrix has at least revealed its pricing for the product. And here it is.

And here's how Citrix will price the full versions of its products, delivered from its own cloud, Azure or its own cloud.. 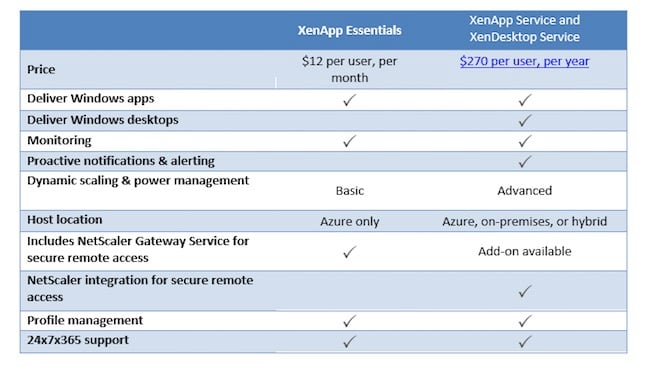 To the mind of The Register's virtualization desk, this is remarkable because it looks like the bundle outlined in the graphic above will be cheaper than running both Essentials editions. We know that XenDesktop Essentials will also $12/user/month so let's do the math: $24 a month for each of the Essentials, plus the Remote Access fee, gets us to $363 dollars for twelve months. Or $90 a month more than Citrix's price for full Xen products.

Those full products do more than the Essentials: they can publish Linux apps and desktops and hook into NetScaler to improve network performance. And they can be hosted in Azure, just like their Essentials cousins.

No wonder Microsoft's offering half off the Essentials price for those willing to migrate ASAP. ®