And yes, total abstinence isn't good for you

Moderate drinking is good for you, a BMJ-published study has found, directly contradicting the advice of the UK government's "Chief Medical Officer", who advised last year there was "no safe level" of drinking. A daily pint reduces risk of a heart attack and angina by a third, a big data study of Brit adults has found, while total abstinence increases the risk by 24 per cent.

The proposition that alcohol has health benefits, and teetotalism invites greater health risks, has been established for a long time. A metastudy by Sheffield University noted that four out of five studies examined showed moderate drinking correlated with a reduction in mortality, with "moderate" defined as around three pints of beer a day for men, and two glasses of wine for women (as recently as the 1960s, official health advice suggested that a bottle of wine a day was fine).

But the moderation message alarmed puritanical health campaigners and prohibitionists, who found a champion in civil servant Dame Sally Davies. Davies declared in January 2016 that there was "no safe level" of drinking based on highly contested "evidence". Campaigners argued that the samples of teetotallers in studies included former drinkers, who had already been "damaged" by years of drinking, and the conclusions were therefore unsound.

The study published in the BMJ today demolishes that challenge, by separating out former drinkers from never-drinkers. Examining 1.93 million UK health records, researchers at the University of Cambridge and University College London concluded that "the protective effect observed for moderate drinking and major clinical outcomes such as myocardial infarction, ischaemic stroke, sudden coronary death, heart failure, peripheral arterial disease, and abdominal aortic aneurysm is present even after separation of the group of current non-drinkers into more specific categories." [our emphasis] The results for teetotallers are as follows:

And in two pictures: 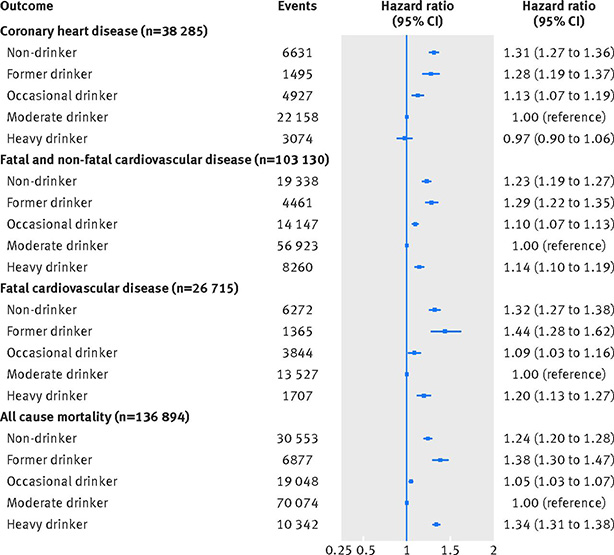 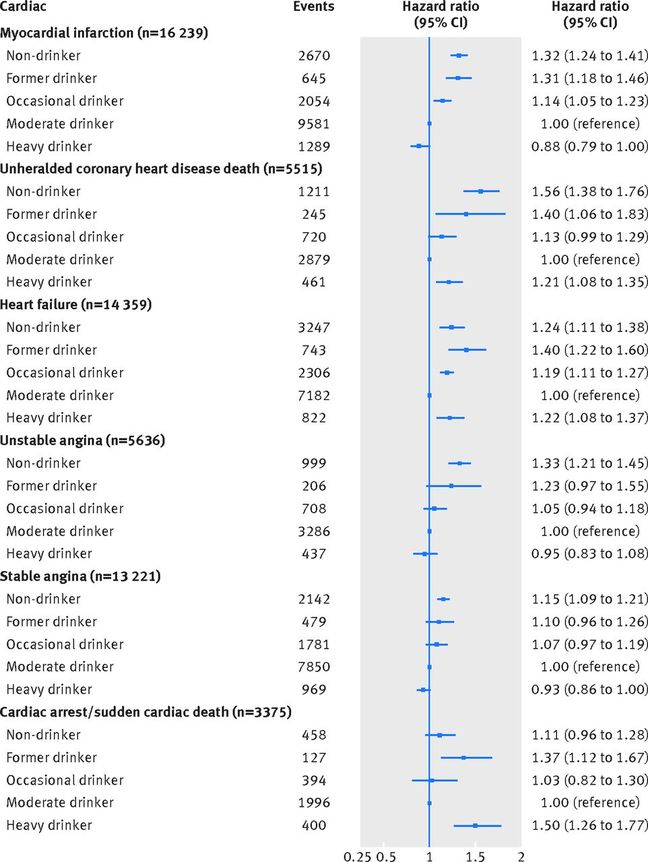 It should be noted that until recently journals rejected studies where the headline RR (relative risk or risk ratio) was under 3.0. However, more than 80 previous studies have come to the same conclusion of alcohol risk, showing a J-curve. The risk of total abstinence is higher than moderate consumption (20g a day, or two pints of beer a day for adult males) then increases as consumption increases.

Perhaps wary of the reaction from the prohibitionists, the researchers stop short of recommending a change in the official guidelines, merely a more "nuanced" message.

But the evidence seems compelling: if we must eat "five a day", shouldn't we also drink "two a day"?®