TRAPPIST-1's planets are quiet. Quiet as the grave, in fact

Sorry, ET fans: these aren't the exoplanets you're looking for 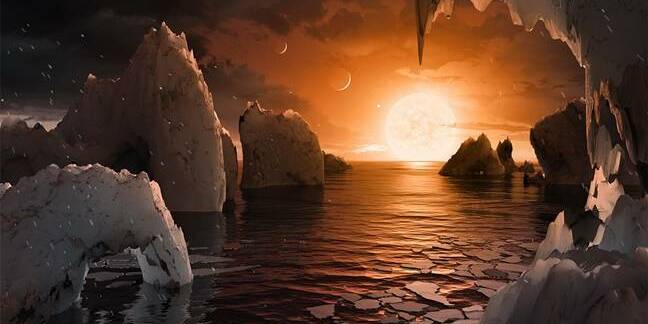 NASA's optimistic visualisation of the surface of a TRAPPIST-1 planet

Boiled dry or extra-terrestrial snowballs, it turns out that the multi exoplanets orbiting the star dubbed TRAPPIST-1 are almost certainly inhospitable to life.

NASA's original announcement held three of the seven planets in the system could be within a habitable zone, but alas there's a killjoy.

Enter Eric Wolf, of the Laboratory for Atmospheric and Space Physics, Department of Atmospheric and Oceanic Sciences, University of Colorado, Boulder, who's run a 3D climate model against the system.

He presents his results in this paper at arXiv. He ran the National Center for Atmospheric Research Community Atmosphere Model version 4, starting with an assumption that the planets at some time had nitrogen, carbon dioxide and water atmospheres.

Of the inner three planets, his modelling found they're too close to be within a habitable zone. Hence, if they ever had water, “they would have undergone a runaway greenhouse and lost their water to space, leaving them dry today”.

The outer three planets, the model found, are too far away, and they “cannot be warmed despite as much as 30 bar CO2 atmospheres, instead entering a snowball state”.

If snowball planet TRAPPIST-1f had carbon dioxide in its atmosphere, Wolf writes, it would condense on the planet's dark side (recall: all seven planets are tidally locked, always showing one face to the star and the other away), and the atmosphere would collapse.

Bother. Surely, though, that still leaves the middle planet in the TRAPPIST-1 system?

Yes … and no. With the right atmosphere, TRAPPIST-1e could feasibly maintain liquid-water temperatures today, Wolf writes, but there's a catch.

To get to its current ultracool dwarf state, Wolf notes, it must have gone through a super-luminous phase before its main sequence.

That would mean for as long as a billion years, TRAPPIST-1e was subjected to intense stellar radiation, and could have “lost up to ~7 Earth oceans of water,” Wolf writes.

Wolf does, however, note that this is merely the first in many climate models that the planets will be tested against. ®

Bootnote: It would be unfair to be harsh on NASA for the original estimate. Wolf says the estimates of “equilibrium temperatures below ~400 K” does suggest “Goldilocks” temperatures, but that equilibrium is a “rudimentary” measure, not a climate model. ®

Bad news: Coronavirus is spreading rapidly across the world. Good news: Nitrogen dioxide levels are decreasing and the air on Earth is cleaner