All the tools you need

Until just minutes before we hit publish on this story, Google was using a YouTube channel run by a fan of Hezbollah to promote potentially lethal drones.

Despite a backlash from advertisers, Amazon, Adobe and Google were among the tech titans advertising on the now-shuttered "Party of Allah"* YouTube channel – which we imagine was not the group's "official" YouTube, though there was no way to verify this.

The Trichordist blog, which has been recording the use of brands on YouTube for five years, found Google's Home (its version of Amazon Alexa) being promoted. We found ads for Adobe Cloud Services and Amazon's Alexa developer initiative. But the most intriguing was for a drone.

The palm-sized Kudrone may not pack much of a punch – but it's remarkable that Google is promoting it at all, given concerns that terror groups are increasingly taking advantage of low-cost consumer drones. 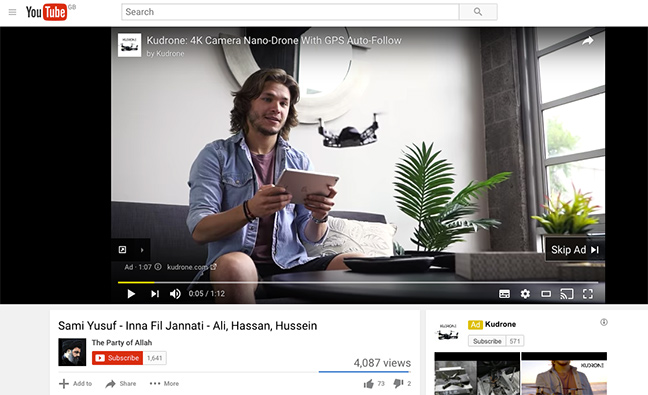 Hezbollah itself – it's both a militant group and a political party in Lebanon, where its paramilitary wing is rumoured to outsize the country's army – has been using drones since 2004. Just recently researchers warned [PDF] of the difficulty of preventing a drone being used on a civilian population. Even a "nanodrone" can still deliver a lethal payload; two years ago a drone was used to land a bottle of radioactive sand from Fukushima on the roof of the office of Japan's Prime Minister Shinzo Abe.

Google claims to have prevented ads being served on "over 300 million YouTube videos and removed 100,000 publishers from its AdSense program". Earlier this week Google promised to make better "tools" to advertisers allowing them to choose – but no significant shift in the content it hosts.

The terror research initiative at the University of Leiden in the Netherlands explains that Hezbollah operates an extensive criminal network in Europe, including arms and narcotics smuggling, and in 2013 the US blacklisted four fund-raisers for raising money for the Lebanese organisation.

We asked Google for details of the revenue share with the individual or organisation running the Hezbollah channel, but have yet to hear a reply. In fact, within an hour of alerting them to the ads, The Party of Allah YouTube channel had been "terminated for violating YouTube's Community Guidelines".

A YouTube spokesperson told us: "YouTube has clear policies that outline what content is acceptable and we remove videos violating these policies when flagged to us."

*The literal translation of Hezbollah