Our Sun's been using facial scrub: No spots for two weeks

Move along, nothing to see here, says NASA. It's just Sol cycling as usual

NASA's Solar Dynamics Observatory has spotted nothing for the last two weeks, which is unusual.

By “nothing” we mean no Sunspots, the magnetic fluctuations that cause the Sun to form dark spots that produce flares of star-stuff that can rise millions of kilometres into space. Big ones could swallow the Earth, with room left over for Mars and some moons. Some Sunspots graduate to cause Coronal Mass Ejections, incidents spew untold quantities of plasma and associated radiation away from the Sun.

The Sun's thought to have an eleven-year cycle during which its internal workings produce different quantities of Sunspots. The data below from the Australian Bureau of Meteorology's Space Weather service shows 17 years worth of data. 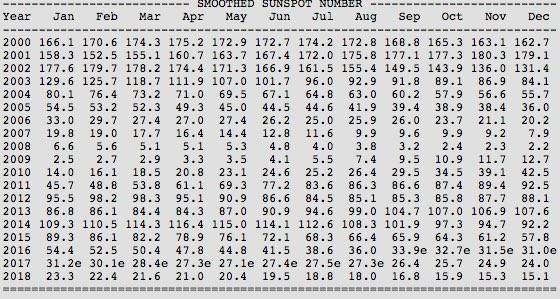 The image at the top of this story shows the difference. At left you'll see the Sun as it was in February 2014, when the Sun experienced 110 spots. At right is March 2017, bald as a baby's bottom. Just hotter. NASA's also posted an animated .GIF here if you want more detail.

As we reported in 2014, a single Sunspot-free day is notable. A fortnight without Sunspots is decidedly unusual, but not concerning because humanity has been watching the Sun for more than two centuries and in that time we've learned about the Sun's roughly eleven-year cycle of Sunspot activity. A low point in that cycle is due in 2020 and NASA reckons the recent weeks of low Sunspot activity is nothing more than normal descent towards an expected minimum of solar activity. ®

Roundup 'Test Like You Fly'? Yeah, we've heard of it