DRAM and flash fabber Micron had a damn good second fiscal 2017 quarter, raking in increased revenues and a $0.9bn profit on the back of strengthened DRAM and NAND prices.

Here are the basic numbers for the quarter, which ended March 2, 2017:

Revenue growth was driven by strength across all market segments. CEO Mark Durcan said: "Strong demand and limited industry supply for NAND and DRAM solutions, combined with significant progress on our cost reduction plan, produced excellent results for our second quarter." He thinks Micron will "continue to capitalise on market trends".

DRAM accounted for 64 per cent of revenues in the quarter and trade NAND sales comprised 30 per cent. The business unit revenues were:

It sells product into the compute and networking, mobile device, embedded and storage markets. In the embedded market there was record automotive revenue for the fourth quarter in a row. In storage, enterprise and cloud were the fastest-growing segments of SSD portfolio, with record shipments through its OEM channel.

Micron is spreading 32-layer 3D NAND throughout its product lines and expects meaningful 64-layer 3D NAND output by the end of 2017, and initial 3D Xpoint revenues this year from its QuantX line.

Buying Elpida sent Micron revenues up a great deal and it has successfully navigated a bust period in the DRAM/NAND supply market to enter a boom.

The quarterly revenues chart above shows the trough-like pattern. 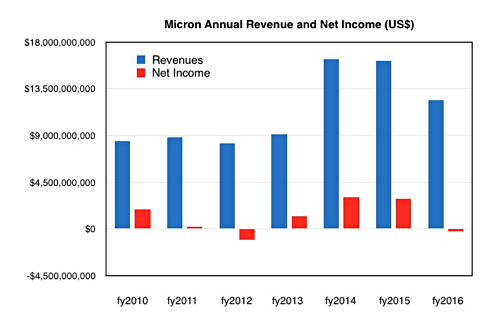