But mouthpiece then denies he's a spokesman

Backers of the troubled ZX Spectrum Vega+ handheld gaming console have told The Register of long delays and seemingly ignored messages when requesting refunds from the company behind the project, Retro Computers Ltd.

A year ago the public was invited to pledge money towards creating a modern reboot of the venerable 1980s ZX Spectrum called the Vega+. Backers each pledged up to £105 through crowdfunding website Indiegogo for a single Vega+ device.

Many backers pledged money towards more than one device, in some cases as presents for family members. Ongoing delays in the project have pushed some backers into demanding refunds and even making section 75 credit card chargebacks.

More than 30 people contacted The Register over the last three days to share their stories of repeated requests for refunds that were not responded to. Of those, more than half were able to show us copies of messages sent directly to RCL by email or Indiegogo direct message.

RCL has broken a number of promises about delivery dates. These include: the original one of September 2016; a launch party in October 2016, which did not include any Vega+s being handed out; November 2016; "in time for" Christmas 2016; late December (when the company blamed problems with buttons for late delivery); and finally February 2017.

Indiegogo has handed the £513,000 total raised from backers to RCL, in accordance with its usual procedures. An Indiegogo spokesman told The Register in February that RCL's campaign was later suspended for "breaking the website's terms of use". A message from someone at Indiegogo's "customer happiness" division, sent to an unhappy Vega+ backer in February and seen by El Reg, says:

... our minimum expectation is that a campaign owner is transparent to contributors about the status of their project by posting updates to their campaign. We will be reaching out to them directly to urge them to post an update. While we can't force them to post an update, if they continue to remain unresponsive, you can use our Terms of Use to take legal action against the campaigner. 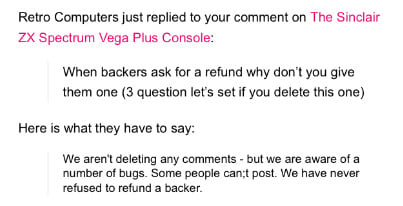 We understand this is RCL's public position. The company did not give us a meaningful response to requests for comment (see below)

The backer, who tweets pseudonymously as @TheBounder, added: "[I] basically tried to shame them into refunding me... I think had I been a week or two later, it would never have happened."

Others were not so lucky.

"Was an early backer after the article on The Reg (Feb 2016)," said Wayne Baker, "but requested a refund earlier this month through Indiegogo/PayPal (who refused as it's beyond 180 days) so then messaged RCL direct through Indiegogo. Had absolutely no response at all from them."

"I've sent several messages via the Indiegogo contact campaign owner link. I've sent 2 requests via the contact us link on the RCL website. I've also posted in the comments on the Indiegogo page to try to draw attention to my requests," added Mat Hilmans.

Vickie Leeming told us: "I originally funded it as a surprise present for my husband for Xmas, that obviously never happened, then I was going to give it to him for our holiday at the end of February – that never happened either – I don't believe it will ever happen now – have asked for a refund at least 5 times and never got one reply or acknowledgement."

Fellow backer Drew Miller forwarded The Register a copy of a message he sent to RCL through Indiegogo after trying to contact them through their website's "contact us" form early this year. It read: "Please receive this email as written notice of cancellation of my pledge and a request for a refund. I no longer believe you are capable of providing the product I pledged for in April, considering the drastic number of delays and your lack of communication toward fellow backers."

"Their customer service is appalling. Considering they have been backed to the tune of 0.5 million pounds, they have been treating their backers with contempt. Random irrelevant updates on the project and no response to any form of communication. An absolute shower," raged backer Alan Christie.

Dave R, who did not want his full name to be published, said: "I've now submitted a section 75 refund request via my credit card company, as I've exhausted all possible refund routes with RCL and Indiegogo. My first refund request was late 2016. I think I'm up to 10+ refund requests."

RCL has since begun replying to some of the 7,000 comments on its Indiegogo page.

We asked a company spokesman for comment. That person had previously given The Register a half-hour interview on 9 March this year, in which they asked not to be named and for their comments to be attributed to "an RCL spokesman". Their full response to our latest request for comment on the delays in refunds and poor communication with backers was:

Another 'fact check' Gareth? As you well know, I am not employed by RCL nor am their official spokesman, and I don't receive emails or any correspondence for RCL. Do some homework ffs.

They copied in RCL MD Suzanne Martin, who had not replied by the time of publication. We delayed publication of this story by a day to give Martin a fair chance to get a response to us. ®

This story was published an hour early by mistake. We replied to the email, copying in Martin, and gave her until 10am the following day to get a response to us. She did not respond.

Lessons learned could be applied to a next-gen fighter, says company
Systems7 Feb 2023 | 7

You may have already known this... but did you know you'll lose data migration unless you switch to paid?
Applications7 Feb 2023 | 25