And it doesn't explode ... hopefully

Pics Samsung arguably made the best Android phone last year – but it lost any bragging rights by committing one of the biggest consumer electronics PR disasters in history.

The South Korean giant has responded to that exploding battery crisis by doing something nobody expected. It's cramming even more new technology into its Galaxy S8 and S8+ flagship models, which were unveiled today.

You didn't just want a new phone, though, did you? No, of course, you didn't. You wanted a new Gear 360 camera, and a new router for controlling your Internet of Things devices. And your life was empty without yet another data-slurping AI bot reminding you of things.

More practically, the S8 and S8+ support a desktop mode aimed at enterprise users – a mode that is kind of like Microsoft's Continuum and is called DeX. This is basically a physical hardware dock that you plug your handset into, and then you plug your USB keyboard and mice and a HDMI monitor into the dock, and hey presto: an Android desktop computer. The dock has a fan to keep the phone cool while in this mode. We've really gone full circle here.

Samsung DeX window-based UX & USB-C dock is v impressive on S8. Been done before, but never usably well, even by Microsoft #unpacked2017 pic.twitter.com/R8CdrpYLIM

Meanwhile, the iris recognition tech introduced on the ill-fated Note 7 is also added to the S8s. The handsets' virtually bezel-free curved-edge display introduced two years ago on the S6 Edge is also now the default – there’s no flat option.

The physical home button is gone; a portion of the display now doubles up as a pressure-sensitive “button.” Given that this hardware button was also used to take photos, it may be missed. While that feature has been taken away, Samsung’s “AI” assistant Bixby – which has hurriedly been brought to market – is honored with a dedicated button on the side.

Bixby – the S8 and S8+'s builtin voice-controlled assistant – differs little from Cortana, Google Now, Siri and Alexa. Samsung claims Bix is more context-aware because it’s slurping up “your location and habits,” just like the others. It's another me-too feature. Bixby can control devices and other tat networked by Samsung's new Connect Home router, which has a SmartThings hub plus Bluetooth 4.1, Wi-Fi, Zigbee, and Z-wave comms.

Bear in mind, only Korea gets Bixby native language support at launch. US English will be added in May and the rest of the world... sometime, whenever.

Samsung's own Continuum-killer DeX looks more promising: Android tweaked to support keyboard and mouse input, overlapping windows, and even drag-and-drop. Fans of Remix OS already know how powerful Android can be as a desktop replacement – now Samsung will be pitching this at enterprises. 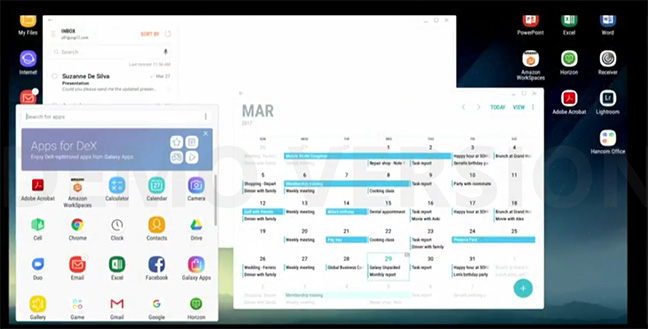 Samsung's answer to Continuum is DeX

Remarkable how there is bigger screen on S8 with smaller physical footprint when compared with Galaxy S7 edge. #Unpacked2017 pic.twitter.com/HV0G8KEoBF

Both models introduce new Samsung silicon: octa-core chipsets manufactured using a 10nm process. Both models also sport 4GB of RAM, and the non-removable batteries provide 3000mAh and 3500mAh for the S8 and S8+ respectively. You can find all the tech specs here, and in detail here and here.