Creators Update gives Windows 10 a bit of an Edge, but some old annoyances remain

Microsoft has made a big investment in the Edge browser with this release. The company made a mistake with Edge, pushing it hard in the Windows 10 launch when it was not really usable. Users turned to other browsers, and it will be difficult to win them back.

I have been using Edge as the default browser for some time, and the experience is now pretty good. New in this release is book reader support (Epub and PDF), with a read-aloud option, and a feature called set-aside tabs, which lets you park a set of tabs for future recovery. You can also pin tabs to a top taskbar, collapsed by default, as a kind of visual favourite. Download options now include "Run" for executable files (the initial release did not even have "Save As"). Adobe Flash content will by default prompt you before running.

Extension support has been in Edge for a while but with limited take-up. I counted just 23 Edge extensions in the Store at the time of writing. There are a few big names: Amazon, Pinterest, LastPass and AdBlock, for example.

New in this release is Mouse Gestures, a Microsoft extension that lets you control the browser with a quick gesture. Despite the name I had limited success with a mouse, since it requires right-click, which is often used for something else. On The Reg site, for example, it works best if you use the dead space in the margins.

The Edge browser is decent, though it will not be easy to win market share from well-entrenched competitors, particularly Chrome, and compelling Edge-only features are hard to find.

Game Mode in Windows 10 reduces background activity during full-screen game play. It uses similar technology to that in Xbox One. The concept is good, but note that it is more about consistent performance than measurable improvements in frame rate.

Dynamic Lock lets you pair your PC with a device such as a phone, and have it lock automatically if you wander away with your phone but not your PC. It works, taking around 30 seconds to lock the screen, though that is more than enough time for something to take your place at the desk. That seems to override the dynamic lock. 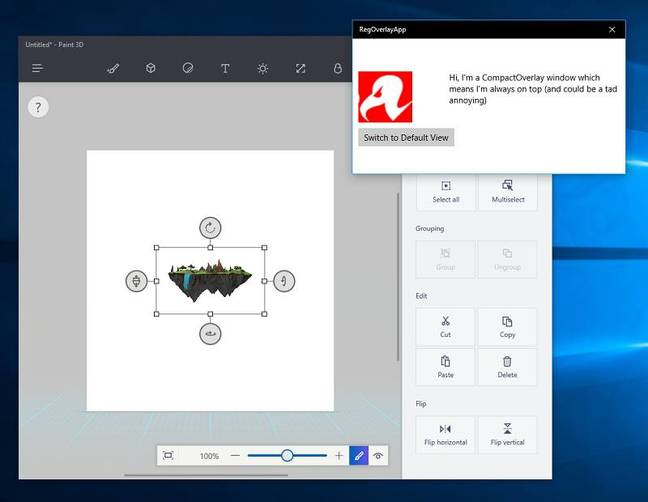 Compact Overlay, or picture in picture, is designed for things like chat applications and allows small always-on-top windows

A new option in the UWP is called Compact Overlay, or picture-in-picture. This lets developers have apps show in a small always-on-top window while you are working in another application. It is intended for things like chat applications, but note that always-on-top can be abused by developers.

The Photos app is improved in this release, with support for ink annotation, a new "Light" theme, and slightly improved editing tools.

Ease-of-access support is upgraded, with an option for mono audio (useful if you have just one earbud in use) as well as built-in Braille narration, when combined with third-party software.

A new Storage Sense option will automatically attempt to free up space when enabled, by deleting temporary files or files that have been in the recycle bin beyond a set time.

Paint 3D is a new application for 3D modelling. Thankfully Microsoft changed its mind about making it the default to replace Paint, but it is a nice freebie for those with the skills to use it.

Windows Defender, the built-in anti-malware tool, is more visible in this release, with an icon in the notification area and a revamped Security Center. 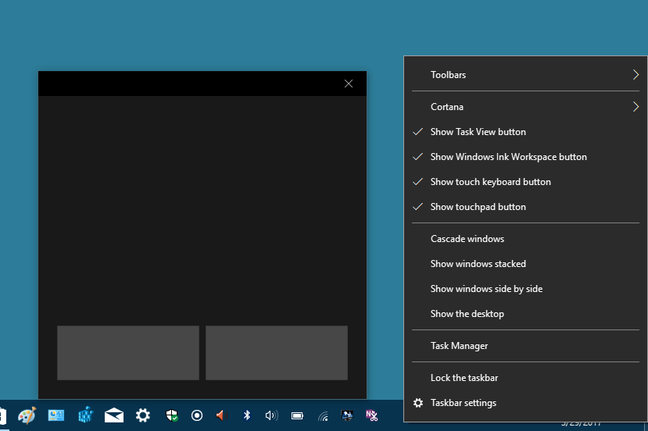 A virtual touchpad for external displays

A version of Windows for Creators? That is doubtful, though 3D enthusiasts will welcome its greater visibility in this release, and there are some nice improvements for pen users. But some of the best features of the Creators Update are the most hidden; the improved Windows Subsystem for Linux for developers and power users; services each in their own process; an address bar in RegEdit; Storage Sense for automatically freeing space (though this is off by default), and other small but important changes.

Windows 10 is maturing, and this is a strong upgrade, even though annoyances remain. ®