And they dare call El Reg The Sun of science and technology – the nerve! 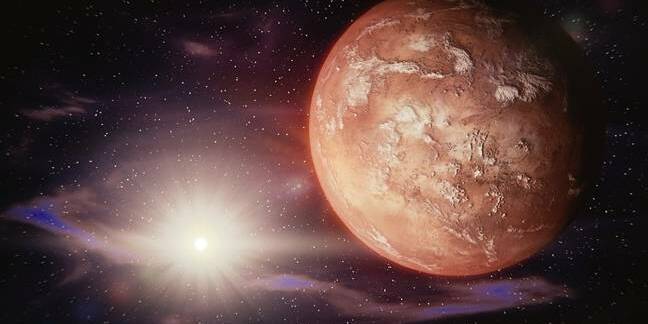 Powerful solar wind and radiation have stripped away most of the Martian atmosphere, transforming the planet from one that could have been wet and with the potential to harbor life, to the barren dusty place it is today.

NASA's Mars Atmosphere and Volatile Evolution (MAVEN) mission was launched in 2013 to study the planet's upper atmosphere, ionosphere and interactions with the sun, and to see how they changed over time. In the latest results, Bruce Jakosky, principal investigator for the MAVEN and a professor at the Laboratory for Atmospheric and Space Physics said: "We've determined that most of the gas ever present in the Mars atmosphere has been lost to space – about 65 percent of the argon that was ever in the atmosphere has been lost."

Today, Mars has a thin atmosphere mainly made up of carbon dioxide and other trace gases like nitrogen or methane. But it's too sparse and too cold to sustain liquid water – a chemical essential for life. There is evidence that the ancient Martian climate was once wet and warm enough for water to flow on the surface. Images of what look like dry riverbeds and minerals have been spotted by NASA's Curiosity rover.

But the solar wind, a thin stream of electrically charged particles that's constantly bombarding the Red Planet's atmosphere, eroded it away. Scientists predict that the loss was greater in the past, since the Sun was younger and more active, emitting far more intense ultraviolet radiation and winds.

These processes would have controlled how Mars' climate changed, altering the chances of habitability. Although no signs of life have been found yet, scientists say it's possible that simple, microbial life could have existed at the surface. As the atmosphere thinned, the planet grew colder and life could have been forced to go underground or into rare surface oases.

Using data gathered by the MAVEN's Neutral Gas and Ion Mass Spectrometer instrument, NASA's Sample Analysis at Mars, and the Curiosity rover, scientists estimated how much gas had disappeared.

First, the team started by measuring the abundance of two different isotopes of argon. Isotopes are atoms of the same element but with various masses due to different neutron numbers in the nucleus. Since the lighter isotope of argon escapes more readily, over time the concentration of the heavier isotope of argon builds up.

By seeing how argon levels changed at different altitudes, the scientists could estimate what fraction of gas was lost to space. Argon was chosen because it's a noble gas – it does not react chemically with any other element so it couldn't have been removed by being locked away in rocks. The only way to remove it is through "sputtering" by the solar wind.

In sputtering, ions from the solar wind smash into the gas molecules at high speed, knocking them out of the atmosphere. Once the team had measured the amount of argon lost by sputtering, they could calculate the efficiency of sputtering to determine how it stripped away other gases like carbon dioxide as well.

As a greenhouse gas, CO2 traps and emits heat, so losing this would have cooled the planet and any surface water down. More details of the study have been published as a paper in Science Magazine. The MAVEN is just one of several missions geared toward studying Mars. All knowledge will culminate in the Journey to Mars mission, which will see a group of astronauts travel to the Red Planet to test if life can survive there.

President Donald Trump signed a bill last Tuesday, pledging $19.5bn in NASA funding covering the budget for 2018 and including human exploration of Mars as a priority. ®

How is 55 Cancri e like a Sisters of Mercy gig? Astroboffins: It has atmosphere

When Jupiter blocks the Sun, the sulphur dioxide atmosphere falls as FROST

Curiosity sniffs Mars' odd atmosphere wafting out of its soil