The JEDEC Solid State Technology Association has revealed that a full standard for DDR5 memory will arrive in June 2018, along with a new NVDIMM-P standard to house the memory, connect it to computers and protect the contents of RAM.

DDR5 has been under development since late 2015, when Samsung and others tossed in some cash start work on faster DRAM.

As is the following description of the forthcoming standard's specs:

JEDEC DDR5 memory will offer improved performance with greater power efficiency as compared to previous generation DRAM technologies. As planned, DDR5 will provide double the bandwidth and density over DDR4, along with delivering improved channel efficiency. These enhancements, combined with a more user-friendly interface for server and client platforms, will enable high performance and improved power management in a wide variety of applications.

JEDEC has this to say about the new NVDIMM-P standard:

The Storage Networking Industry Association also offers a little data about NVDIMM-P, in this document (PDF) from which we have extracted the slide below. 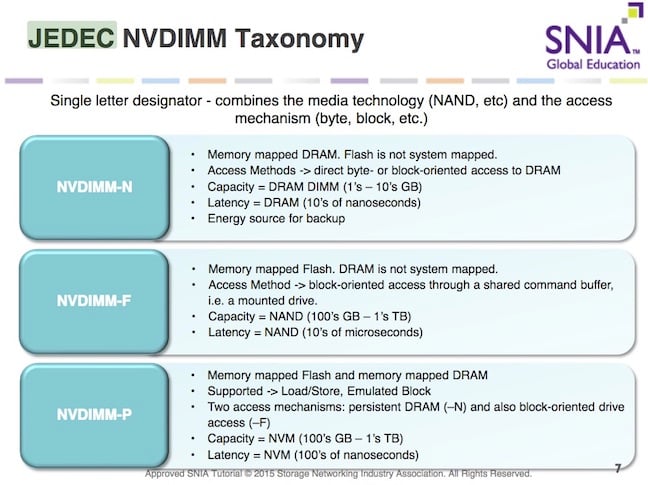 It's not hard to see why JEDEC has decided to let us all know that work on the standard is proceeding: Intel hasjust announced its Optane products for servers and PCs, both with impressive specs.

The new JEDEC standards show that memory-makers other than Intel have plans for faster and/or persistent, memory too.

We know there's plenty of demand for this kind of stuff because analytics applications increasingly assume they can access a large pool of memory. And who ever passed up the chance for faster components inside servers and PCs?

JEDEC doesn't say exactly when in 2018 the new specs will arrive. It's even harder to say when product or computers that support the specs might arrive.

Clues about those matters will be on offer on June 19th 2017, at JEDEC's Server Forum. ®