Remember the old EMC IDC Digital Universe we’re-drowning-in-a-zettabyte-sized-data-flood annual studies? Like a phoenix, it has come back.

It’s back, sort of, with Seagate paying the sponsorship bills and the resulting study called Data Age 2025: The Evolution of Data to Life-Critical. 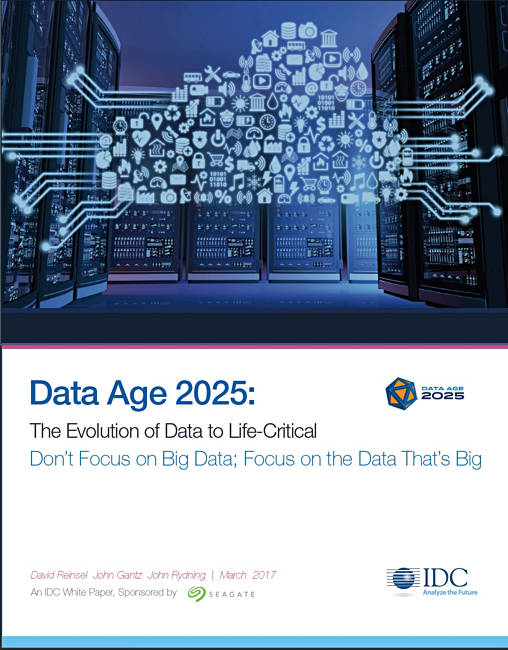 The exec’s summary starts out with: “We are fast approaching a new era of the Data Age. From autonomous cars to humanoid robots and from intelligent personal assistants to smart home devices, the world around us is undergoing a fundamental change, transforming the way we live, work, and play.

“Imagine being awoken and tended to by a virtual personal assistant that advises you on what clothing from your wardrobe is best suited to the weather report and your schedule for the day or being transported by your self-driving car…. As you relax on the new sofa, Saturday night’s takeout will be a pizza made by a robot and delivered in record time by a drone.” You wish!

All our data will exist in a global datasphere and, IDC forecasts, by 2025 the global datasphere will grow to 163 zettabytes (that is a trillion gigabytes). That’s 10 times the 16.1ZB of data generated in 2016. IDC reckons that nearly 20 per cent of this data will be critical to our daily lives and nearly 10 per cent of that will be hypercritical (and,El Reg suggests, no doubt 1 per cent will be hyper-super-duper critical too.) 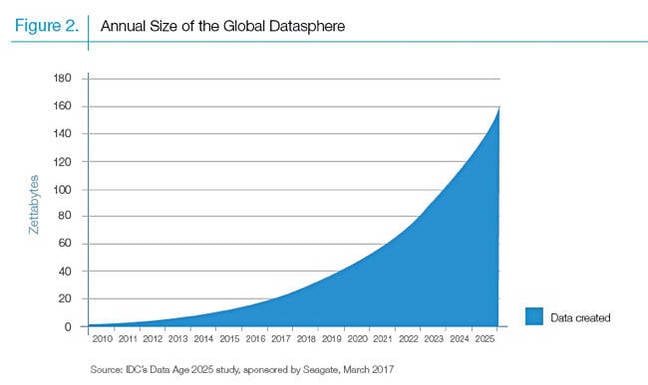 This data is coming from embedded systems and the Internet of Things, mobile and real time data, and artificial intelligence (of course!)

The IDCites exclaim: “The enterprises that thrive during this data transformation will be those that can identify and take advantage of the critical subset of data that will drive meaningful positive impact for user experience, solving complex problems, and creating new economies of scale. Business leaders should focus on identifying and servicing that unique, critical slice of data to realise the vast potential it holds.”

And Seagate’s interest? Data stored on disk of course. The bigger the global datasphere, the brighter Seagate’s disk storage prospects.

The study suggests: “the Data Age 2025 research projects that over 19ZB of storage capacity must ship across all media types from 2017 to 2025 to keep up with storage demands. Around 58 per cent of the capacity will need to come from the HDD industry and 30 per cent from flash technology over that same time frame.” 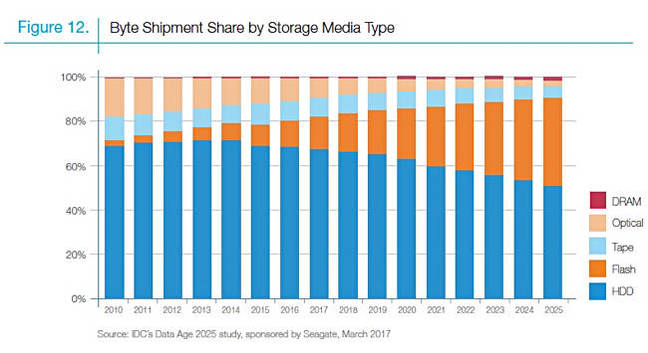 Enterprises will rely more on disk than flash: 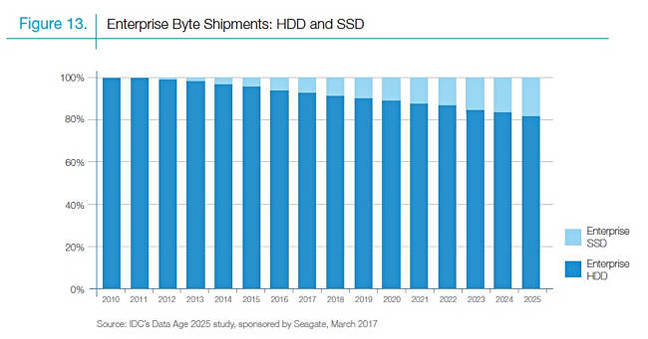 This is all great fun to read and you can spend an enjoyable lunch break doing so here (PDF). ®