But can he do it on a cold rainy night in Amiens? 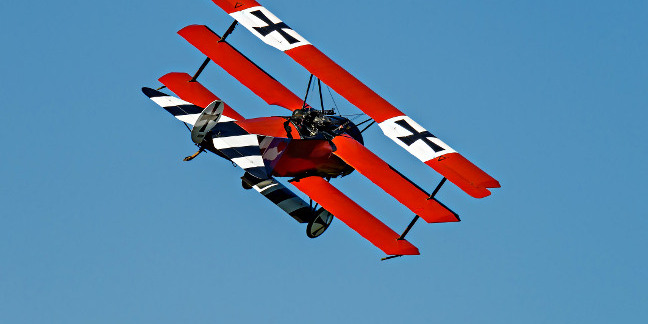 A German orthopaedic surgeon in Norfolk has spent £70,000 building himself a flyable full-size replica of the Red Baron's Fokker Triplane.

Dr Peter Brueggemann built the First World War-era aircraft by hand – even though when he started he couldn't fly, as ITV News reported.

The bright red Fokker Dreidecker I (German for "three-decker", or triplane) was built to a set of technical drawings prepared by an American aviation fanatic in the 1970s. No original Dr.Is exist, though a number of replicas have been put together during the 20th century.

Dr Brueggemann even acquired the title of baron from the Principality of Sealand, ready for when his Fokker makes its planned first flight this summer.

He told the telly station: "Being a surgeon has certainly helped and I have used surgical equipment like needles and forceps when stitching materials to the ribs of the plane."

The Fokker even has two replica Spandau machine guns fitted, as well as a modern Lycoming O-320 flat four engine for ease of maintenance and finding spare parts.

Brueggemann hopes to display the Fokker at airshows, particularly hoping to fly it at Stuttgart in his native Germany. His website, complete with photos of the build, can be found at dreidecker.co.uk.

His wife, Sue, told The Telegraph: "It's taken so many years and he's dedicated all his holidays and weekends to it so we've seen so little of each other I've felt like the equivalent of a golf widow!"

Fokker's original Dr.I design was heavily inspired by British Sopwith planes that fought above the Western Front. During the early stages of air fighting in WWI, rate of climb was deemed vitally important. As aeronautical science was still in its infancy – aircraft were built from plywood and canvas, while the relatively primitive rotary engines of the day were only capable of around 110hp – the easiest way of increasing the amount of lift available was to add more wings.

First seeing action in early 1917, the Sopwith Triplane was an instant success. However, a captured example was shown to Anthony Fokker, prompting German development of their own version. The first pre-production Dr.I was issued to a frontline unit in August 1917 and proved an instant hit. German fighter squadron commander Manfred von Richthofen recommended the Dr.1 be issued to as many frontline units as possible.

Von Richthofen made his place in aviation history as the Red Baron, so-called because of his aristocratic background and the all-red colour scheme he chose for his personal aircraft. He was shot down and killed in 1918 after amassing 80 victories, 19 of which were with the Dr.I.

Historians argue as to who actually killed von Richthofen; although military authorities credited Captain Roy Brown, a Canadian naval officer flying with the RAF, later analysis proved that the fatal bullet could only have been fired from the ground. Although events are disputed, opinion sways towards the fatal shot being fired by Sergeant Cedric Popkin of the 24th Machine Gun Company, an anti-aircraft unit forming part of the 4th Australian Division. ®