Read the signs and weep because NO ONE CARES

Something for the Weekend, Sir? Everyone is looking at me as I break into a sweat. "Come on, come on," I mutter to my smartphone but already the harrumphing has begun.

Why do English people harrumph when they're impatient? They could shout "Hurry up, fool!" or offer to help. But no, they always prefer to make a guttural hissing sound through their noses, like air escaping from an old leather settee you've just sat in.

These are the kind of people down at the gym who do a little exercise and, to broadcast the fact to their fellow members, insist on blowing their exhaled breath while screwing their mouths into tiny round holes.

I should help them out by explaining how much easier breathing can be by opening one's mouth normally. Instead, I harrumph at them.

I am trying to pay for my extra-hot fair trade soya decaf caramel mint chocka mocha focka carbonated Bulgarian snow forest chai espresso latte plus vegan sprinkles and a twist of lemming with my handset, but it's not working.

Actually, to be precise, my phone is fine: the café's own-branded payment app is not working. Instead of the usual barcode and friendly payment prompt, all I'm seeing is a blank screen.

As I repeatedly quit and restart the app, before restarting all other apps, my phone, my car, my life etc without luck, the harrumphing around me is reaching epic proportions. You'd think there'd been a puncture in a Zeppelin factory.

Moments after I concede defeat and pay by cash, I spot the problem.

It would seem that the moment I walked in from the street, my data connection switched automatically from 4G to the café's Wi-Fi. And because it's a café, the Wi-Fi is utterly shit.

And because the Wi-Fi's shit, the café's app can't connect. And because the app is as shit as both the café and its Wi-Fi, none of its shit developers thought to spend 30 seconds adding even a shit "no connection" warning, instead designing their shit app to show an inexplicably shit plain-white screen while everyone around you harrumphs shittingly relentlessly.

As you will be aware, such lack of shit-giving is commonplace. You only have to read the aftermath of each daily hacking of customer data in which an organisation claims "Customer security is our highest priority" to know that it is absolutely not. If it was, there wouldn't have been a security breach in the first place. Nor would I be staring at a blank screen on my phone.

Indeed, an organisation's highest priority has nothing to do with keeping customers happy: it's to over-inflate management bonuses. Customers come much further down the list. They may not even make the top 10.

This is all the more evident given that most people don't expect perfection, being perfectly satisfied with a little communication and signage, and then consider how easy this is to implement in the communication age.

Well, at least it would be if the café's Wi-Fi wasn't shit but there's nothing to be done about that. Ever wanted to see what an authentic "blank face" looks like? Ask a barista to reboot the router.

Of course, writing signage into software has its own problems beyond the usual challenges of user interface design. If you're too specific, you build obsolescence into your product – although that may not always be a bad thing. For example, this dialogue that popped up on Mrs D's computer recently was as good as any I've seen to indicate that her copy of Word might have fallen slightly out of date.

On the other hand, I might also suggest that if you're going to take the trouble to deliver an on-screen message to your customers, it doesn't pay to be obscure. Do you remember those 1980s T-shirts printed with the slogan "Frankie says relax"? Well, I'm going to get one made up that says...

Yup, plain language works better. Take the following straight-talking dialogue from Kaspersky, for example. I appreciate their effort in including this pretty message but some extra guidance in one of the few languages I can actually fucking speak would have been helpful.

As you can see, I'm not quite sure whether to click on the button labelled "Computer self-destruct" or the one labelled "Varnish my buttocks".

Let's get back to selling stuff, though. Countless studies remind retailers of the importance of engendering customer fidelity through the likes of membership rewards schemes. Oh, I can't wait to join the following outfit. Think of all the money I will save!

On that note, a little customer communication can go a long way – in either direction.

My favourite demonstration of customer relations gone bland is when you receive those promotional emails with Mail Monkey placeholder text still in the header. While I can forgive small outfits and clubs for this metadata faux pas, it galls when big companies do it. For the ultimate in corporate development not-giving-a-fuckery, this in-app message is hard to beat: 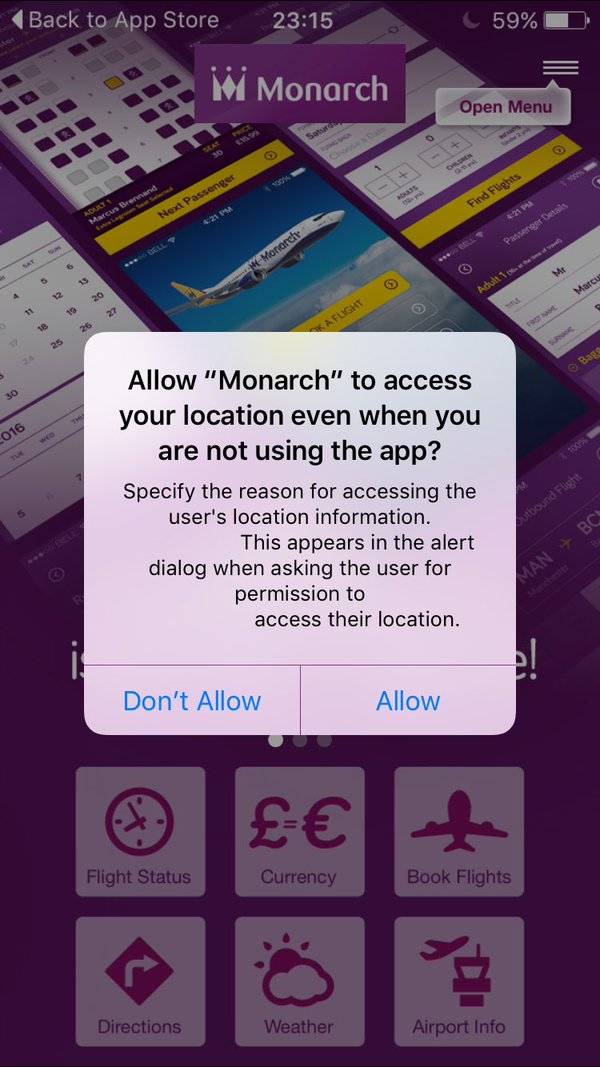 Or take the Deichmann shoes app on Android: its default initial pop-up message when you launch it for the first time is to prompt you to download the app… which you are already running.

The mind boggles why so little attention is devoted to retail apps, given that vast numbers of consumers are shifting over to them to use even in-store. Apadmi's 2017 Retail Report on mobile shopping apps makes the point quite clearly: consumers told researchers that they would use branded retail apps more if only those apps didn't stink to high heaven.

Oh dear, perhaps I need more caffeine to calm down (that's how it works on The Register). Or maybe not, as it makes me need too many comfort breaks through the day – which reminds me of some confusing user-generated signage I encountered earlier this week inside the Gents toilet at a customer site.

There I am, flush from all that posh coffee, desperate for a slash, only to be confronted by a notice telling me that I should not be so disgusting. Eh?

Relieving oneself in a toilet isn't a graceful thing but this was the first time I have ever been scolded that doing so was an "unpleasant habit". I mean, it's a toilet. You are supposed to go to the toilet in a toilet. That's what a toilet is for.

Later in the day, the sign was replaced by an amended version 1.1, which only goes to confirm that you should never jump on an initial launch but wait for the update. 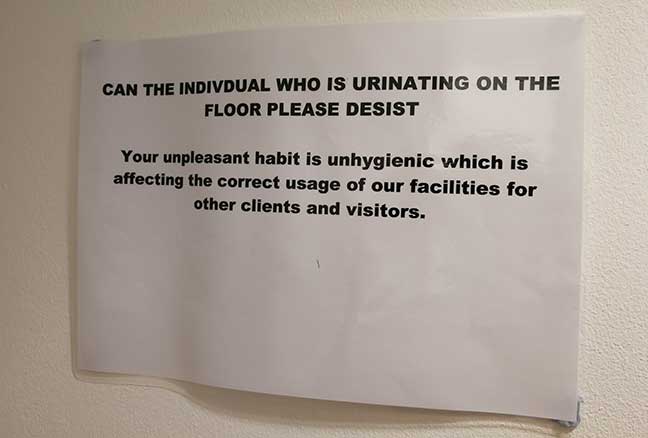 It was while reading this sign that I realised it was distracting me from what I was supposed to be doing and now the floor was wet, as were my trousers. Perhaps there are occasions when it is preferable to see no user messages at all.

Alistair Dabbs is a freelance technology tart, juggling tech journalism, training and digital publishing. He would like to tell you more but he is already hearing the call of nature yet again and will need a little personal time to feed his unpleasant habit.