Tech support planned to clean gunk with canned air. But the user had an industrial-strength compressor ... twice 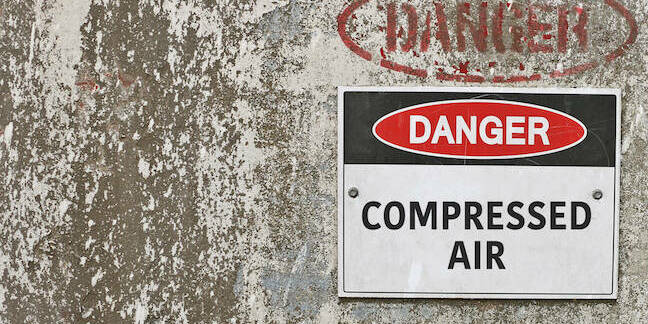 On-Call Welcome again to On-Call, El Reg's regular Friday feature in which readers share their recollections of being asked to fix follies.

This week, meet “Bill”, who in the early 2000s did IT support for an engineering company.

One fine day, Bill was assigned the task of sorting out a broken inkjet printer.

“I visited the site and was informed by one of the printer’s users that the 'Clean print heads' light had illuminated on the printer’s control panel.”

The user had tried to take matters into their own hands by cleaning the heads with compressed air. Which wasn't a bad idea because in the early noughties inkjet printers were still a bit dodgy and their very nature meant there was a decent chance some ink could gunk up a head. A puff or two could conceivably blow away an obstruction and Bill imagined that a quick puff from a can of compressed air would probably have sorted things out.

But when Bill arrived he found that the print heads were the least of his worries, because the user had employed one of the factory's air compressors for the job. Said compressor, as Bill put it in his mail to On-Call, was rated to produce “the sort of hurricane needed to clean engine blocks”. It had therefore almost literally blown the printer away.

Bill told us he “removed the defunct (but admittedly very clean) printer and replaced it with an identical, working unit and told the user that in future he must only use the cleaning function on the printer application on the attached PC.”

“It turns on the first user had failed to pass on the message about cleaning the printer to his colleagues, one of whom had subsequently air-blasted the second unit to its untimely death.”

There's a happy ending of sorts to this story, because Bill tells us he graduated from tech support to “the wonderful world of SAP consulting.”

On-Call reckons he probably wouldn't mind an even stronger air compressor to get through some of the problems he faces now.

If you have tales of users' own fixes blowing kit away, click here to share them with me and you could pop up in a future edition of On-Call. ®