The RealStor product line is a Dot Hill one, and Seagate bought Dot Hill in August 2015 for a quite impressive $694m. The company made disk drive arrays, like the AssuredSAN and RealStor 6004, for OEM customers, such as HPE and possessed a lot of clever storage technology but had not made lots of money. Since the acquisition Dot Hill has been absorbed into Seagate’s Cloud Systems and Silicon Group and not been very visible.

The RealStor 5005 is an all-flash array, which Seagate is pitching at multi-branch office environments which have high performance but relatively low capacity needs. The system can run at 400,000 with a 1 millisecond latency or 300,000 IOPS at a 300 microsecond latency.

The other product is the RealStor 4005 which comes in three versions: all-flash, all disk or hybrid, and has less controller horsepower than the 5005. Seagate says the 4005 is good for video surveillance “where quick access to some data is necessary, but a large amount of data remains “cold” and unused.” 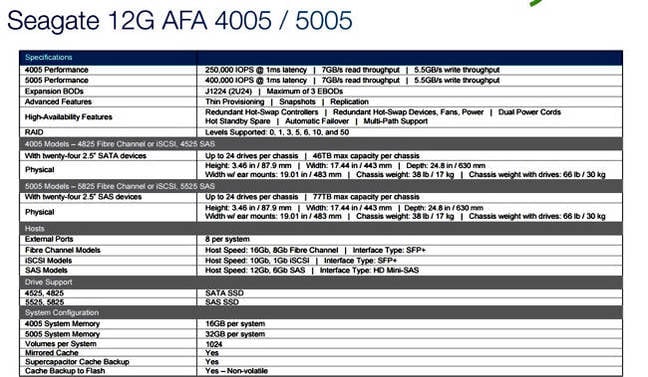 Software in the hybrid 4005 can move data from disk to flash in real-time when faster access is needed.

There is an all-flash RealStor datasheet covering the 4005 and 5005 AFA variants. These come in a 2U x 24-bay box. The system has an ASIC-based architecture, which is said to deliver predictable performance at consistent low latencies.

Seagate says the RealStor 5 series is available now through its partners, and claims the AFA version has an exceptional $/GB cost structure. It says it has ultra-high performance at a uniquely low cost point. We suppose the price is low compared to other AFAs. ®