How's that for a remote login? NASA puts New Horizons probe to sleep 3.5 billion miles away

Pic NASA's New Horizons spacecraft – right now 3.5 billion miles (5.6 billion kilometres) from Earth – has been powered down by boffins as it heads out to the icy wastes of the Kuiper Belt.

The probe, which was launched in 2006 and gave humanity its first close-up images of Pluto in July 2015, was sent shutdown commands on Friday. We're told it has now powered down its scientific instruments and main flight computer. The craft will spend the next 157 days in hibernation mode, resting the on-board equipment and its scientists back at mission control.

"We're looking forward to taking advantage of the reduced mission operations workload during this hibernation, as well as one early next year, to plan much of the MU69 flyby," said Alice Bowman, New Horizons mission operations manager at Johns Hopkins University Applied Physics Laboratory.

Until the weekend, the probe had spent the past 852 days in continuous operation. After it screamed by the Solar System's outer dwarf world, New Horizons was kept alive so it could send back the gigabytes of information it had collected, which – thanks to the distance involved – was sent at less than 2Kbps. 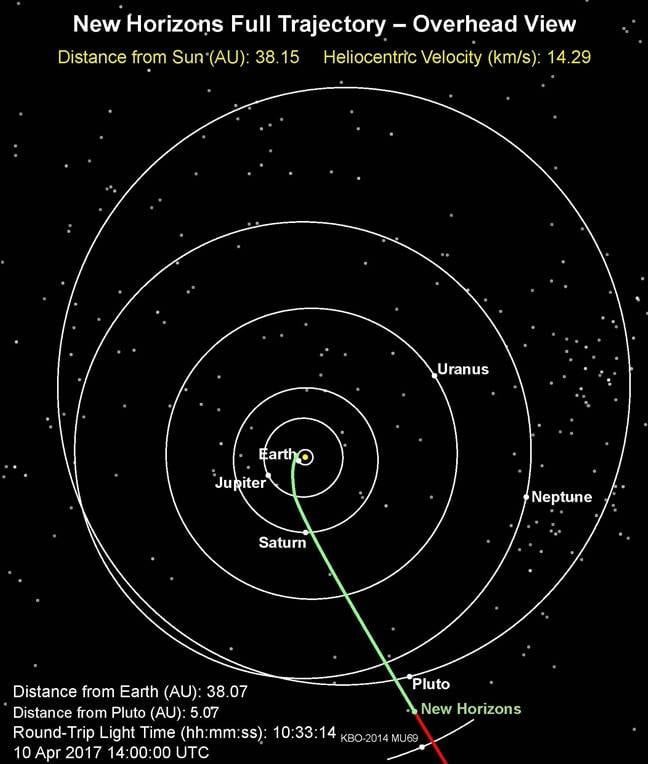 New Horizon's onboard systems won't be totally shut down. The spacecraft's beacon will power up once a week to send a test tweet back to mission control, and once a week the auxiliary computer will send back a quick situation report on the health of the instruments so far.

It will be powered up again on September 11 for a system check and possibly a thruster firing that will take it closer to its next target, the planetoid known as 2014 MU69. The body, discovered by the Hubble Space Telescope, is thought to have a diameter of between 10 and 30 miles (16 TO 48 kilometres) but we won't know for sure until the probe gets closer.

2014 MU69 orbits our sun every 295 years, and the exact path is a little sketchy. NASA has two flight plans over the body ready, but will need more accurate measurements to make sure it doesn't go past too far away for usable science, or crash onto the planetoid itself. ®